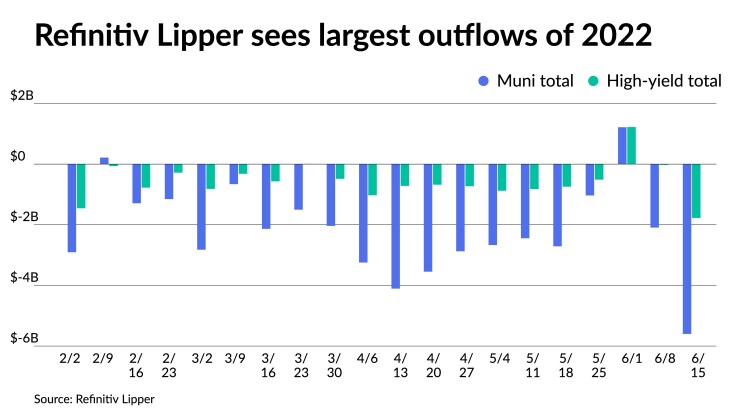 Municipals were little changed on the day while other markets continued to react to the Fed rate hike as U.S. Treasuries were stronger and equities sold off.

Refinitiv Lipper reported $5.6 billion of outflows, the highest figure of outflows in 2022, as Monday’s massive selloff contributed to more losses for municipals.

That figure is up significantly from $2.094 billion of outflows the week prior and brings the total to $28.7 billion year-to-date.

The uptick in outflows could be just the beginning, participants say. The hotter-than-expected inflation data and the Fed hiking rates three-quarters has led Jason Appleson, head of municipal bonds at PGIM Fixed Income, to believe outflows will most likely continue for the foreseeable future.

“As long as retail believes rates are going to go higher, then they’re going to continue to pull money from fixed income,” he said in an interview. “That’s just how it is.”

Appleson said there was a “dead cat bouncing relief rally” at the end of May during which participants were overly optimistic, believing that a 50-basis-point drop in yields meant the worst was behind.

The relief rally, he said, was spurred by crossover buyers leading up to it. “People came in and they said, ‘Look at the relative value in the municipal bond space. It is cheap. We have 30-year ratios at 110%, 10-year ratios at 100%,” he said.

The cheapness prompted institutional investors to come in and start buying munis, which eventually kicked off the rally. Following the recent selloff, though, ratios have risen again.

Additionally, during the relief rally toward the end of May, ETFs had inflows week-after-week despite outflows from mutual funds. However, now ETFs are experiencing outflows.

“If you have everyone who’s selling in the same direction, that’s not beneficial for the market,” he said.

Now, though, the muni market can return its focus to market fundamentals after the Fed’s decision to raise interest rates 75 basis points solidified the summer outlook for the market, said Kim Olsan, senior vice president at FHN Financial.

Bidside reference points were forced to secondary flows by a minimal new-issue calendar, while Municipal Securities Rulemaking Board data indicated longer-term bonds were preferable in secondary flows, she noted.

Bonds due past 12 years captured 56% of volume Wednesday, exceeding the 47% threshold it reached last week, according to Olsan.

“Structures such as Aa2/AA- Energy NW WA Electric Revenue 5s due 2036 (call 2029) that are trading in the 3.50% carry a two-fold benefit—ratios work out to above 100% to USTs and durations are manageable in a period of rate volatility,”  she said.

“Further out the curve, 4% coupons continue to offer interesting concession:  Aa1/NR New York Dorm Personal Income Tax 4s due 2047 have widened out to +130/AAA and behind 4.50% yields — about 15 basis points wider and more than 60 basis points higher than trading early in June,” she added.

Olsan said UST volatility will spark prioritization of relative value and finding the best spots on the curve.

“Since volatility increased in early May, 5-year AAA/UST ratios have traded up to 82% and as low as 64%, currently settling around 70%,” she said.

Multiple large-scale negotiated deals, including roughly $1.2 billion of tax-exempt GOs from Georgia, headline an expected uptick in market supply for the latter half of June and the end of the second quarter, according to Olsan.

“Given the seasonality attached to the summer timeframe, supply vs. demand moves to the forefront,” Olsan said.

June, from a historical perspective,  has had the worst performance of the summer months since 2012, she said, posting a near-flat return rate in that timespan.

Conversely, June’s median supply over the past decade tops the other summer months, totaling $36 billion, per Olsan.

Currently, the 10-year triple-A MMD rate is higher than any summer period in the past 10 years. The 10-year sits at 2.91% Thursday.

Returns in July for the last decade have averaged 0.55%, she said, reaching upward of 1.5% during that time span. The month’s higher returns is attributed to its average supply of $29 billion, the lowest of the summer months.

The monthly supply average for August since 2012 is $32 billion, contributing to higher average gains of 0.55% in the last decade, according to Olsan.

“This August will bring a unique scenario with two FOMC meetings straddling the month on either side, potentially creating greater uncertainty,” she said.

FOMC redux
Analysts expect unsettled markets and a growing likelihood of recession as the Federal Reserve ramps up its efforts to tame inflation.

Continued “aggressive” Fed moves will create a “serious risk” of recession, said Center for Economic and Policy Research Senior Economist Dean Baker. “Understandably, the Fed would want to raise rates to demonstrate its determination to keep inflation under control. It is also hard to justify a near zero federal funds rate when the unemployment rate is close to 50-year lows. However, there is a serious risk that the Fed will overshoot if it continues on this path.”

“The chances for a recession have clearly risen now even further,” said DWS Group U.S. Economist Christian Scherrmann. It’s apparent the Fed wants to “regain its inflation credibility,” as it pushes ahead “with much tighter monetary policy in order to get back ahead of the curve.”

With inflation, as measured by the consumer price index, “at an embarrassingly high 8.6% and in danger of going still higher,” he said, “the Fed probably feels it has no alternative. Its reputation has been tarnished. It therefore also has no alternative now but to follow through on its hawkish guidance — even if a recession is the ultimate outcome.”

And while the Summary of Economic Projections (SEP) offers an optimistic view on inflation and unemployment, Jeffrey Cleveland, principal and chief economist at Payden & Rygel noted, “Fed officials have made it clear that they are more afraid of doing too little to tame inflation than they are of doing too much. As a result, the economy may be in for an uncomfortable reality check.”

Having waited too long to act and now trying to catch up, he said, “policymakers are poised to ‘overcorrect.’”

“How realistic is it to expect GDP growth to slow somewhat and inflation to tumble back toward 2% while the unemployment rate rises only slightly?” Cleveland asked. “We’re becoming more and more skeptical.”

“That said, it will likely be a few more months before we get clear and compelling evidence that inflation is ebbing,” Cleveland said. “Further, there’s no guarantee that consumer inflation expectations will back off given the trajectory in food, energy prices, and rents.”

“We fear that, even if policymakers acknowledge the risks of oversteering, they would ultimately conclude that a little economic pain in pursuit of price stability (getting inflation back to 2%) is desirable,” Cleveland said. “Most FOMC members agree that there could be more economic pain, with 13 out of 18 members seeing an upside risk to their unemployment forecasts.”

And many believe the SEP projections, which cut real GDP estimates and lifted unemployment projections,  are too optimistic.

“Based on the magnitude of the downward revision in the FOMC’s real GDP projections, its projections of a gradual rise in the unemployment rate may prove too optimistic,” said Mickey Levy, Berenberg Capital Markets’ chief economist for the U.S. Americas and Asia, and a member of the Shadow Open Market Committee.

Ed Al-Hussainy, senior interest rate strategist at Columbia Threadneedle Investments, was blunter. “Ignore the precise median forecasts,” he said, “they are likely still too optimistic — and instead focus on the direction of travel in 2022/23.”

After Wednesday’s statement, Al-Hussainy said his belief is “the Fed is more likely to overshoot and tighten too much, sacrificing growth/employment in the process, than to undershoot and allow inflation to surprise them to the upside again next year.”

The Fed, he noted, recognizes “that an un-anchoring of inflation expectations would be a disproportionately costly policy error for the Fed relative to a shallow recession. The front end of the rate curve remains vulnerable to sharp repricing when data surprises nullify the Fed’s already weak forward guidance. I think this mix continues to favor staying long duration and in curve flatteners.”

Still, the threats to the economy are not all controllable by the Fed, said Alex Strekel, director of investment management solutions at Clearwater Analytics. “While the Fed can take action to stabilize the U.S., it cannot as effectively impact these other risks, heightening the probability that stagflation impact will occur even if not expressly coupled with a recession.”

The four-week moving average widened to negative $1.879 billion from negative $1.156 in the previous week.

The average seven-day simple yield for all tax-free and municipal money-market funds fell to 0.30%.

Gabriel Rivera contributed to this story.