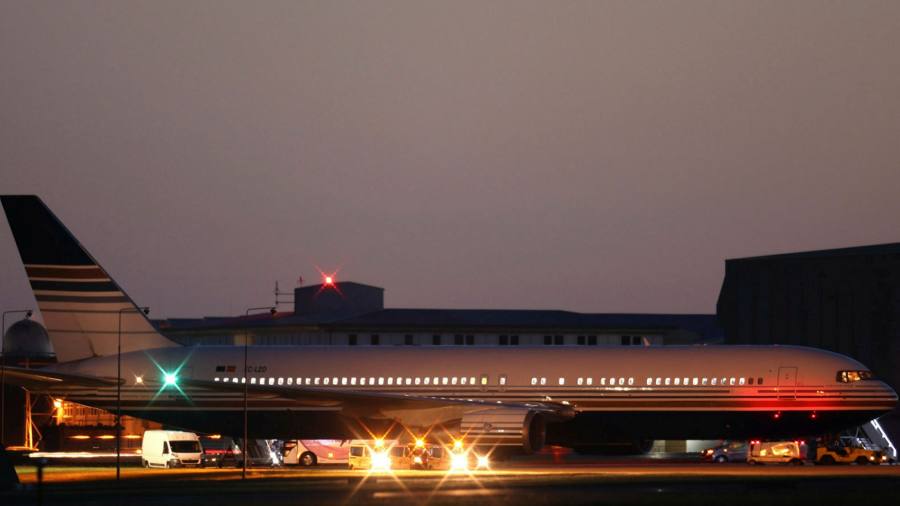 UK government plans to go ahead with its first flight deporting asylum seekers to Rwanda on Tuesday night were grounded by a series of last-minute interventions by the European Court of Human Rights and court of appeal in London.

Government sources confirmed on Tuesday evening that there would now be no one on the flight, which had been preparing to take off from a military base in Wiltshire, due to carry seven asylum seekers to the Rwandan capital Kigali.

Home secretary Priti Patel said many of those removed from this planned flight would be placed on the next.

“We will not be deterred from doing the right thing and delivering our plans to control our nation’s borders,” she said. “Our legal team are reviewing every decision made on this flight and preparation for the next flight begins now.”

The ECHR, which deliberates on possible violations of the European Convention on Human Rights, ruled late on Tuesday on behalf of one of seven migrants due to be deported, an Iraqi, that he should not be removed until after the policy had undergone judicial review in coming weeks.

This set off a string of other eleventh-hour rulings, including two further injunctions from the ECHR, three successful appeals at the UK Court of Appeal and one other ruling — leaving no one who could legally be deported.

James Wilson, deputy director of Detention Action, one of several bodies that have challenged the removals through the courts, said:

“The ECHR rarely intervenes in the legal matters of member countries. That it has done so now shows how potentially dangerous the government’s Rwanda removals policy is.

“The ECHR has recognised that no one should be forced on a plane until our substantial legal challenge against this policy is heard by the High Court next month,” he added.

The ECHR’s intervention sets up a possible clash with UK prime minister Boris Johnson. Johnson suggested earlier on Tuesday that the UK might withdraw from the ECHR to prevent lawyers thwarting the government’s agreement with Rwanda, which is intended to deter people smugglers from trafficking migrants across the Channel.

Asked before the ECHR had intervened whether, given legal challenges to the policy, it was time for the UK to leave the convention, Johnson said: “Will it be necessary to change some laws to help us as we go along? It may very well be. And all these options are under constant review.”

In response, Liberty, the human rights group. tweeted that “leaving the ECHR would . . . represent the biggest attack on human rights in this country in a generation”.

“It is misleading and dangerous for the prime minister to suggest lawyers who bring such legal challenges are doing anything other than their job and upholding the law,” the Bar Council and Law Society of England and Wales said in a statement.

The government’s plans to deport asylum seekers to Rwanda have polarised opinion, with the archbishops of Canterbury and York, together with 23 bishops, joining the outcry and describing the policy on Tuesday as “immoral”.

But it is proving popular on the right of the Tory party where it has been applauded as a means of establishing control over Britain’s sea borders. Around 10,000 people have entered the country across the Channel this year.

Some 39 of about 130 people who have been detained since crossing the Channel into the UK in May were originally scheduled for removal to Rwanda on Tuesday evening.

The Court of Appeal initially declined to grant an urgent injunction to block the flight, but a judge handling last-minute appeals by phone on Tuesday night, appeared to reverse course on individual challenges on human rights grounds after the ECHR ruling.

Earlier in the day, Johnson won cheers from his cabinet when he defended the deal with President Paul Kagame’s government, which has agreed to process asylum claims and provide residence to successful applicants in return for an initial payment of £120mn from the UK.

“We are not going to be deterred or abashed by some of the criticism directed at this policy some of it from slightly unexpected quarters. We are going to get on and deliver,” he said in a veiled reference to the dispute that has appeared to put his Conservative government at odds with much of the establishment — and the heir to the throne.

The judicial review at the high court will in the next three weeks look at the risks posed to asylum seekers being sent to Rwanda, which has its own long record of human rights abuses. The UN refugee agency has said that the deportations breach Britain’s obligations under both domestic and international law.

In its ruling the ECHR said: “The Court had regard to the concerns identified in the material before it, in particular by the United Nations High Commissioner for Refugees (UNHCR), that asylum-seekers transferred from the United Kingdom to Rwanda will not have access to fair and efficient procedures for the determination of refugee status.”