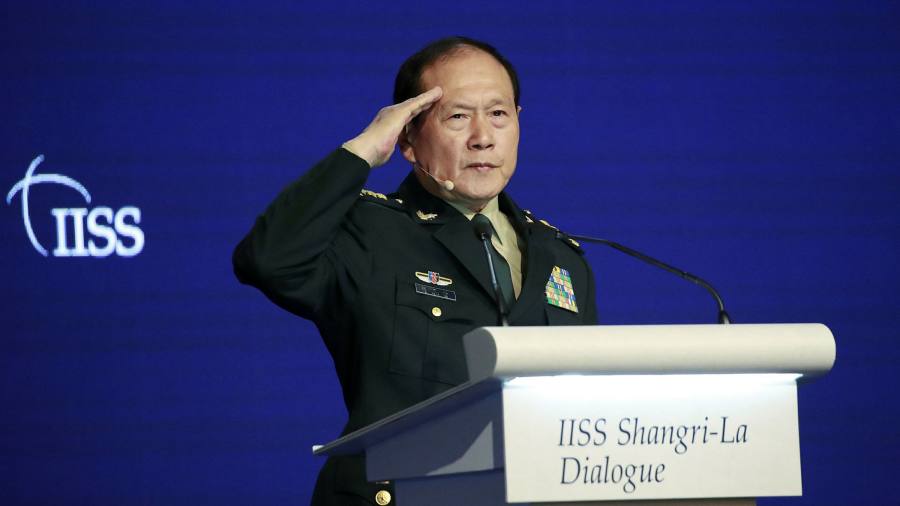 China’s defence minister has strongly pushed back against US accusations of aggression as he sought to present Beijing as a responsible power and western countries as outsiders undermining stability in Asia.

China aimed to be “a builder of world peace, a contributor to global development, a protector of the international order and a provider of public goods”, General Wei Fenghe told the IISS Shangri-La Dialogue security conference in Singapore on Sunday, using a keynote phrase coined by Chinese president Xi Jinping.

Wei’s remarks came as defence and foreign policy officials and analysts at the forum confronted China over its threats against Taiwan, aggressive interceptions of western countries’ military aircraft in the South China Sea and ambitions to build footholds for its expanding armed forces.

Regarding Taiwan, Wei’s message was inflexible but not more belligerent than usual. He claimed that the country was “China’s Taiwan” and reiterated that Beijing perceived annexation of the island as a historic mission that “absolutely must be achieved” and for which its military would be ready to fight.

But Wei said peaceful unification remained “the biggest hope of the Chinese people, and we continue to hold the greatest sincerity and are willing to make the biggest effort” to achieve it.

“Wei laid out a fairly compressive position that I viewed as firm, but didn’t break any new ground. He repeated the statement [China’s president] Xi [Jinping] made to [Joe] Biden last November that China will do its utmost to pursue peaceful reunification,” said Bonnie Glaser, director of the Asia Program at the German Marshall Fund.

The relatively calm stance came as Beijing tried to avoid a further escalation in tensions with the US over Taiwan. On Friday, China praised a meeting between Wei and US defence secretary Lloyd Austin that was dominated by discussions over Taiwan as “frank, positive and constructive”.

The following day, Austin criticised Beijing in an address to the summit over “a steady increase in provocative and destabilising military activity near Taiwan”, and warned that the US would maintain “our own capacity to resist any use of force” against the country.

However, observers said China’s mild messaging belied a stance that remained hardline in substance. One US official said People’s Liberation Army officers had told their US counterparts in recent months that the Taiwan Strait was not international waters.

“That sounds like a new position, and has operational implications,” Glaser said.

While Beijing has in the past mostly complained about US support for Taiwan, Wei also objected that “other countries” were interfering in China’s affairs over the island.

“He put out a veiled statement acknowledging they are watching what other countries are doing in support of Taiwan,” said Meia Nouwens, an expert on the Chinese military at IISS, the think-tank and organiser of the conference.

He said it was natural that China was developing new weapons when asked by the Financial Times about a highly advanced Chinese hypersonic weapon test in July 2021 that shocked the Pentagon.

“Many countries are testing weapons. There is no surprise that China is doing so,” Wei said. “These weapons are for protecting the national interest of China . . . It is natural for us to have some new weapons.”

The FT reported last year that the PLA had tested a nuclear-capable hypersonic weapon that flew around the world and fired a missile as it flew over the South China Sea.

“Gen Wei has acknowledged that the test last year was a weapons demonstration, contradicting earlier alibis from the foreign ministry,” said Ankit Panda, a nuclear expert at the Carnegie Endowment for International Peace. “The subtext to his comments is that we should expect more such tests, perhaps, as China continues to modernise.”

“We still don’t understand whether China intends to field such a weapon, however,” he added.