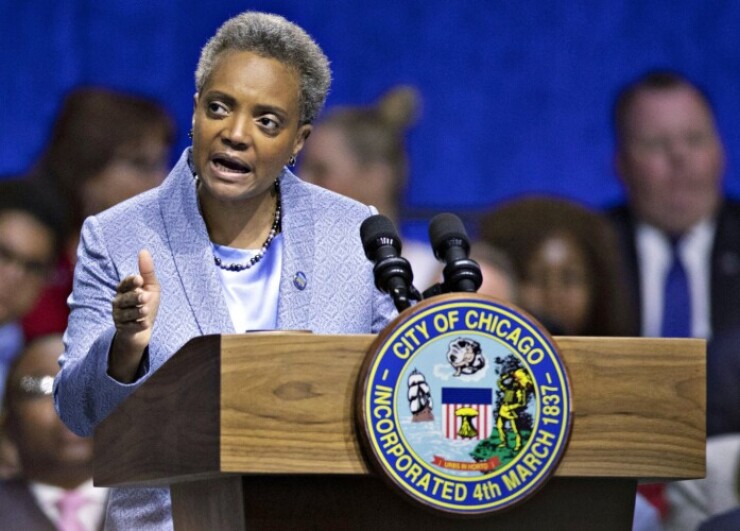 The Chicago City Council signed off on Mayor Lori Lightfoot’s choice of Bally’s Corporation to hold the city’s first and only casino license, a project billed as central to structurally balancing the city’s books.

The council vote of 41-7 came Wednesday several hours of contentious debate during which many members, even some who eventually cast a favorable vote, voiced their objections over a myriad of concerns. They included opposition to the location, questions over the validity of revenue projections, a lack of a guarantee on revenue projections, and a review process that some believed favored Bally’s.

“This is a major, major milestone in our city,” Lightfoot said at a news conference after the vote. “Besides creating a world-class entertainment venue for our world-class city, a casino signals to the world that our economy is on a strong path towards recovery, ready to develop new and lucrative projects. Additionally, it puts us further on a path…toward long term fiscal stability for our city.”

The new revenue will go toward funding public safety pensions.

“One of the biggest obstacles to a structurally sound fiscal future is our city’s inability to meet our police and fire pension obligations without resorting to an increase in property taxes,” Lightfoot said.

Boosters predict the $1.7 billion project will produce 6,000 construction-related and permanent jobs and eventually at least $200 million for the city in annual tax revenues and $200 million for the state’s $45 billion multi-year capital plan. Local governments would receive another $25 million.

The Illinois Gaming Board must still approve the proposal.

Under state statutes, the revenue must go to fund the city’s police and fire public pensions which, in turn, will relieve pressure on the city’s corporate fund to cover rising contributions to the severely underfunded plans.

“This has been an extremely thorough process” that marks the culmination of three years of work since the state approved the first Chicago casino license, Chief Financial Officer Jennie Huang Bennett said during a meeting Monday of the special casino committee. “This is a generational opportunity.”

“Time is of the essence” to approve the project as the city considers how to close a roughly $305.7 million 2023 budget gap and “this ongoing structural revenue stream is critical to that process,” Bennett said.

Bennett had warned during prior committee testimony that without the casino revenues, the city would need to find other sources like the property tax levy to help cover looming annual increases in what’s now a $2.3 billion pension payment for the police, fire, municipal, and laborers funds that are carrying $33 billion of net liabilities.

Without additional revenue, the city would be at risk of reverting back to bad financial practices like scoop-and-toss debt restructuring that added to its structural imbalance.

By counting on the future revenue, the city moves closer to reaching structural balance which Bennett has told rating agencies the city will achieve in the 2023 budget. Reaching the goal could eventually help win upgrades while failing to do so could drive downgrades.

Bally’s will also make an ongoing annual payment of $4 million, with $2 million earmarked for security and $2 million for city budget use. About 30% of the expected casino-related revenue will come from various city taxes on property, hotels, and parking.

The city has used the pension funding requirement as a selling point for the casino although they won’t result in supplemental payments.

Despite increased contributions, the funds remain frail. The city’s collective net pension liabilities stood at $32.96 billion in the last actuarial reports and the funded ratios range from a low of 18.97% for the firefighters to a high of 44.42% for the laborers fund with the municipal fund at 22.96% and police at 22.21%.

Critics of the casino package questioned the timing of the vote and voiced frustration with the approval process in general as many believed it was the special casino committee that would vet the proposals from the three finalists and then recommend a choice to Lightfoot.

Instead, Lightfoot named Bally’s as the city’s pick for its sole license earlier this month leaving the committee’s sole duty to vetting the proposal.

“We need more time to analyze this….and see if we can better,” said Alderman Brian Hopkins, calling the Bally’s site and proposal the weakest among the finalists. He charged it was given favorable status by the administration. “This is a mistake and the ramifications of this decision will continue on in the future.”

The administration was intent on a Wednesday vote and so introduced the ordinance Monday and delayed a vote to avoid allowing critics to take that action on Wednesday delaying the vote through a parliamentary maneuver.

“That’s pretty extraordinary and I look at that as a red flag,” said Alderperson Brendan Reilly. “All of us have been put in this pressure cooker artificially. There’s no hard deadline here. Folks just want to get it done quick.”

Some compared the approval process to the swift passage of the widely derided $1.15 billion 2008 parking meter system lease that then Mayor Richard M. Daley pushed through with little review. He then spent most of the proceeds to close budget gaps that resulted in 2008 and 2009.

Backers countered that multiple, hours-long meetings to vet the proposal were held and that the council will have future input under modifications to the proposal and they noted that Bally’s was the only of the three finalists who reached an agreement with labor.

Council member Tom Tunney, who chaired the special casino committee, defended the choice noting it offered the highest upfront payment and that the city maintains an equity stake in the project.

“It’s not going to be a panacea but it’s certainly a step in the right direction,” Tunney said. “This is not the parking meter deal.” The council also now will have a say on material changes to the agreement and annual status reports are required.

Lightfoot’s administration in April narrowed an initial list of five proposals to three with the goal of picking one in May so a temporary casino could be running as soon as next year. Bally’s will use the former Chicago Tribune Publishing Center just northwest of downtown.

Lightfoot and her predecessors have eyed for three decades establishing the city’s first casino to capture revenue that is now lost to competitors in suburbs and across the Indiana and Wisconsin borders.

The state awarded Chicago its first casino license in 2019 as part of an expansive gambling package that allowed for six new casinos to help support a $45 billion state infrastructure but its tax structure was considered too onerous to attract an investor. There are 10 casinos currently operating in the state.

The city is rated BBB-minus, A, and BBB-plus by Fitch Ratings, Kroll Bond Rating Agency, and S&P Global Ratings, respectively.

Civic and research groups have warned against relying heavily on gambling revenues given their economy-driven fluctuations and stiff competition.