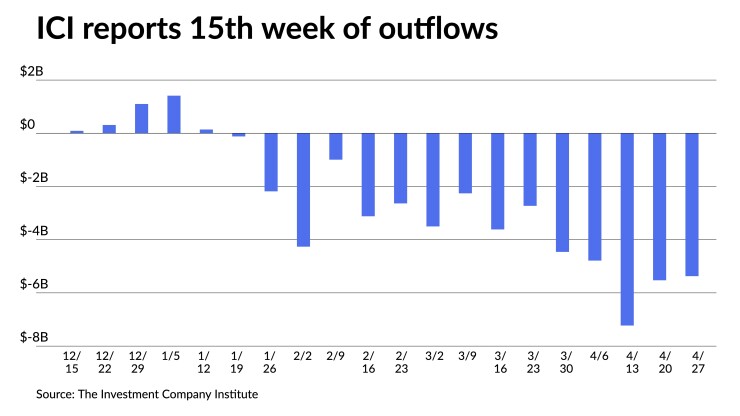 Municipals were mixed as participants mostly sat on sidelines while U.S. Treasuries rallied on the short end after the Fed hiked rates a half-percentage point. Equities rallied to close the day.

The bond market has “largely priced” in the hawkish actions, said Jay Hatfield, chief investment officer Infrastructure Capital Management. ”We expect the 10-year Treasury to start to top out in the 3% area as global pension investors with $52 trillion of assets reallocate to almost risk-free Treasuries.”

Triple-A muni benchmarks were cut up to one point while UST yields saw double-digit bumps inside seven years.

Outflows continue with the Investment Company Institute reporting $5.371 billion pulled from muni bond mutual funds in the week ending April 27, down from $5.526 billion of outflows in the previous week.

Exchange-traded funds saw massive inflows at $1.068 billion — the largest figure since at least 2013, according to Pat Luby, a municipal strategist at CreditSights — versus $43 million of inflows the week prior.

And since April 27 as ICI’s numbers were finalized, Luby said, based on his calculations, muni ETFs have pulled in an additional $900 million.

Some tax-loss slump selling could be attributed to the record-shattering figure as people use ETFs as a temporary investment to maintain exposure in the investment class. There’s also an estimated $23 billion of redemptions from April that came into the market this week, according to Barclays PLC.

“So investors want to put that to work,” Luby said. “It’s quick and easy to do it in ETFs until you find the right bond.”

Additionally, growth in secondary market trading has also been off the charts for muni ETFs, so there’s buying there as well, Luby said. The increase in assets under management is in addition to investors buying up shares secondary, he added.

Mutual fund flows, on the other hand, paint a bleak picture.

But, “what’s not visible from the net flows out of muni mutual funds is there is buying going,” he said. The gross purchases of mutual funds in March were the biggest in at least 13 years.

Luby said large net redemptions hide the fact that there are investors who are coming in.

“They’re seeing higher yields, and they’re coming in to buy,” he said. “We see we see that in ETF flows.”

He said for mutual fund outflows to stop — or at least slow — is a change in the interest rate environment. Some retail investors look at their mutual funds and see a decline in NAVs, and they reduce exposure or sell.

“As long as we’re in a rising-rate environment, pressure will be on mutual funds, and there will be more people redeeming than buying,” Luby said.

Trading, supply and spreads
Kim Olsan, senior vice president of municipal bond trading at FNH Financial, noted that recent trading breakdowns point to “a shorter duration bias — with bonds due inside three years capturing more dealer-to-customer sales totaling almost 60%.” But in maturities past 10 years, she said that “the figure drops closer to 50%.”

Olsan noted that “upcoming supply, holding steady at a projected $12 billion in the next 30 days, can be expected to continue to be tailor-made to specific orders but without the coupon variety that dominated 2021’s business.”

A “reaction to rate volatility and uncertain demand conditions,” she said, has caused the “widening in several general-market names” in trading this year,” as “all actively traded state GOs have undergone a widening effect.”

Among Florida, Texas, Washington and Wisconsin 10-year GOs, she said, “the average spread has widened” seven basis points from the end of 2021.

She noted Washington’s state GOs “have cheapened the most, now trading eight basis points wide to December’s levels.” Olsan said that “supply this year is up only marginally from last year’s pace.”

Meanwhile, Tennessee’s state GO spread “is flat to late 2021, largely due to the infrequency of trading in the credit.” Local GOs, however, “have undergone a credit shift following the state’s elimination of dividend/interest income taxes last year,” according to Olsan.

She said, “recent high-grade new issues are pricing +30/AAA or wider in intermediate and longer tenors, a large shift from issuance a year ago with spreads in the +10/AAA range.”

“As is the case with most high-grade names having widened out this year, yield opportunity in liquid credits has increased to attractive levels,” she said. “Taxable equivalent yields sit at 4% (2-3 year), 5% (10 year) and in long 4% tenors exceed 6%.”

No FOMC surprises
The Federal Open Market Committee raised the fed funds target 50 basis points to a range of 0.75% to 1% and set a June 1 date for balance sheet reduction to begin rolling off its Treasuries and mortgage-backed securities by $47.5 billion a month at that time, ramping up to $95 billion in September.

Treasuries will be reduced $30 million a month initially, rising to $60 billion a month in the fall, while it will rolloff $17.5 billion of agency debt and MBS at first, climbing to $35 billion in September.

These moves “will not be enough to slow inflation,” said Scott Pike, senior portfolio manager at Income Research + Management. “We will most likely need to move well into the second half of this year before we even begin to know if the policy changes they make throughout the year have the desired impact on moving inflation toward a level at which they are comfortable.”

“After the initial knee-jerk reaction, likely driven by heavy post-release covering, rates across the curve are little changed with a slight steepening bias,” said Eric Merlis, managing director of global markets at Citizens Financial Group. “This reaction seems to be exactly what the committee members were seeking and speaks to the consensus nature of forward guidance in both the statement and balance sheet plan.”

The statement, he said, “reinforced a commitment to fight surging inflation while acknowledging recession concerns from the ongoing pandemic and supply chain disruptions among many potential headwinds.”

But Fed Chair Jerome Powell at his press conference, “reiterated his view on the extreme tightness in the labor market and that financial conditions will limit future job creation,” Merlis said.

At the press conference, Powell, said the panel is not “actively considering” 75 basis point hikes, saying the “broad consensus” of the FOMC is “50 basis points is on the table for the next couple of meetings.”

While the estimate of the neutral rate is 2%-3%, Powell said the FOMC “will not hesitate to go above neutral” if such actions are needed. “It’s certainly possible we’ll have to move rates to restrictive levels and we won’t hesitate” if such a move is appropriate.

Phil Rasori, COO at MCT, said, the market expected the half-point rise, and recent volatility can be attributed to “uncertainties” about the Fed’s balance sheet reduction. “This meeting has given us more clarity than any time in the past two years to the path with which the Fed plans to tighten its balance sheet,” he said.

“Spread compression between the 10-year U.S. Treasury and 30-year MBS prices since the Fed began massive purchases of agency MBS in March of 2020 should widen to more normal levels as the Fed begins to wind down its balance sheet.”

The half-point hike makes it appear the Fed is “engaged in a dash to get rates back to neutral territory by the end of this year,” said Brian Coulton, Fitch Ratings chief economist. “Their singular focus on trying to control inflation is not only spelt out explicitly — with the committee described as being ‘highly attentive’ to inflation — but is also reflected in short shrift given to the Q1 GDP decline and the rapid pace of balance sheet reduction ahead. With inflation pressures ongoing, the risk of monetary tightening prompting a significant growth slowdown or even recession in 2023 is growing.”

And expect another 50-basis-point increase in June, said John Farawell, head of municipal trading at Roosevelt & Cross. “Before the Fed’s announcement the 2- and 10-year Treasury were trading at a 2.79% and 2.98% yield. Post announcement we see the 2-year unchanged and the 10-year up one basis point.”

Still, Tom Garretson, senior portfolio strategist at RBC Wealth Management, saw a “dovish surprise” as “Powell pushed back against the need for a 75 basis point rate hike, providing some certainty to markets that while the Fed is likely to continue raising rates aggressively at upcoming meetings, it will do so predictably and prudently.”

He warned investors about being complacent since the next FOMC meeting “will feature an update to the Fed’s economic and rate hike projections, which could be the foundation of yet another hawkish pivot from the Fed, as was the case in the December 2021 and March 2022 meetings.”

And thought the meeting provided no “shock and awe,” Ron Temple, head of U.S. equities at Lazard Asset Management, said, “we did get meaningful tightening and a clear signal that more 50bps hikes are ahead.”

With inflation still “undesirably high” and employment levels tight, he said, “a sharper tightening could easily be justified,” but “the Fed appears to have prioritized growth over inflation and easing the economy into, ideally, a soft landing. The key data to watch going forward will be shelter costs, job growth, and wage increases, to ascertain whether even stronger actions are warranted.”

Marvin Loh, senior macro strategist at State Street Global Markets, said, “the main message from the presser is that inflation is public enemy No. 1 and the Fed will do what it takes to bring back price stability.”

The Fed believes “this means a series of 50 basis point hikes and the natural cadence of weakening demand (but not collapsing) and an improving job market with participation continuing to improve,” he said. “For the moment, the markets are giving the Fed the benefit of the doubt on these topics and we are in the camp that we have seen peak hawkishness for the moment.”

And since uncertainty remains, volatility will continue, Loh said. “Risk assets have traded stronger since the FOMC meeting, with equities higher, yields lower, particularly at the shorter end as some of the hawkish froth is coming out of the market.”