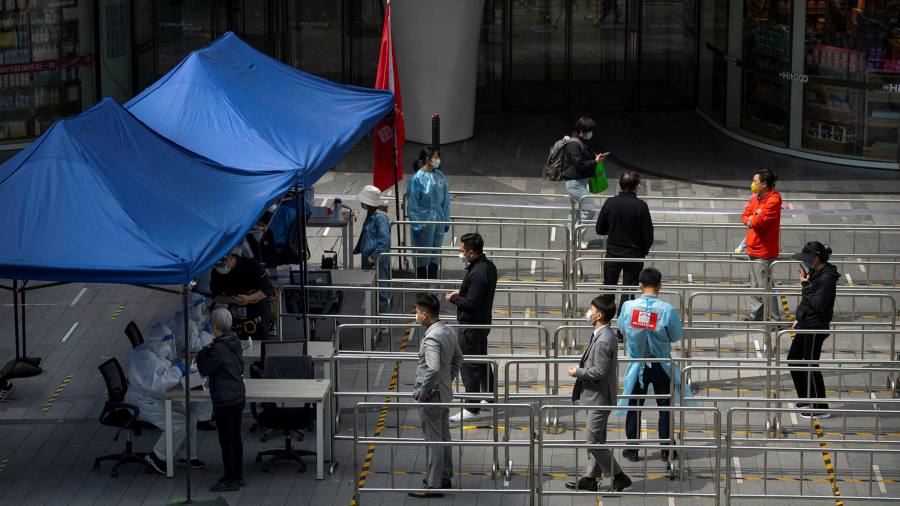 Elsewhere, London’s FTSE 100 rose 0.4 per cent and Germany’s Xetra Dax gained 1.2 per cent. The euro pushed almost 0.8 per cent higher against the dollar to just under $1.06, but remained more than 4 per cent lower for the month after this week hitting its weakest level in five years, as traders anticipate the US Federal Reserve moving much faster to raise interest rates to curb inflation than the European Central Bank.

The moves in European and Asian equity markets came after a statement from China’s politburo, the Communist party’s decision-making body, that promised to “strengthen macro adjustments” and “achieve full-year economic and social development goals”. It also said it would ensure the “stable and healthy” operation of capital markets.

Traders also looked through data showing that growth in several of the eurozone’s biggest economies including France, Italy and Spain weakened sharply during the first quarter, hinting at stagflation in a region grappling with soaring energy and food prices.

“A lot of investors are mainly focused on China, as China really powers the global growth engine and a lot of hopes are hinging on China pulling an ace out of its sleeve,” in terms of economic stimulus, said Gregory Perdon, co-chief investment officer at Arbuthnot Latham.

The Stoxx is on track to fall just under 1 per cent this month, outperforming US indices, which have been dragged sharply lower by expectations of Fed rate rises and stresses for some large companies in the tech sector that dominates US equity gauges. Nearly 75 per cent of European companies have beaten profit expectations during the quarterly earnings season, partly boosted by the weaker euro, according to Barclays.

On Thursday evening, Apple warned that supply chain shortages and Chinese factory shutdowns could cost it up to $8bn in the quarter to June. Amazon reported its slowest quarterly revenue growth, citing falling online sales and rising costs.

Shares of Amazon and Apple were down 8.5 per cent and 2.3 per cent respectively in pre-market trading on Friday.

In turn, futures trading implied the benchmark S&P 500 share index would open 0.5 per cent lower in New York, as it heads towards a more than 5 per cent loss for the month. Contracts tracking the technology-heavy Nasdaq 100 were 0.8 per cent lower. The broader Nasdaq Composite is on track to fall more than 9 per cent in April, in what would be its worst monthly performance since March 2020.

Elsewhere, the dollar index fell 0.6 per cent after the gauge, which measures the currency against six others, hit a 20-year high on Thursday. Markets are tipping the Fed to raise its main borrowing rate by half a percentage point at its May meeting, and then by the same amount at the next two meetings.

The yield on the 10-year US Treasury note, a benchmark for debt costs worldwide, was broadly steady on Friday morning, but remained around its highest since the end of 2018.