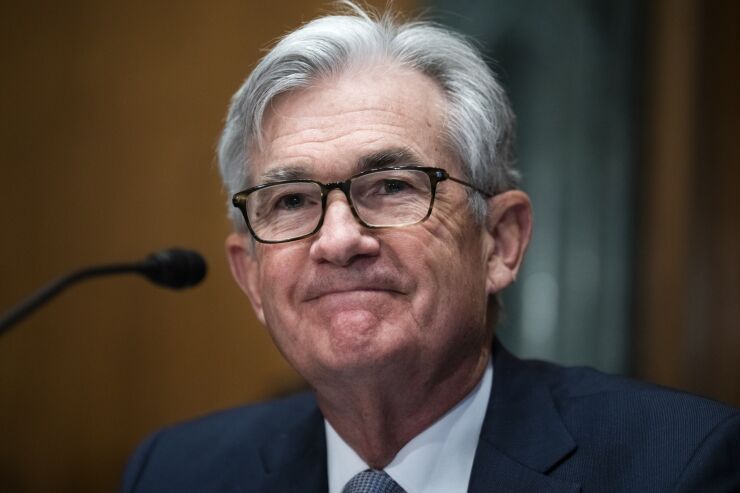 Jerome Powell wants to put the Federal Reserve at “the forefront of technological changes” in the financial sector. The central bank is beefing up its tech acumen to get there.

Calling it imperative to “evolve with the rest of the financial system,” the Fed chair said during an event hosted by the Bank for International Settlements last month that the entire Fed system is pouring resources into payments and digital currency research and development.

That effort includes snagging talent from the private sector, per a watchdog report released in February.

The central bank has hired at least seven former employees of Circle, the issuer of the popular stablecoin USD Coin, during the past three years. At least five of those hires held executive or leadership roles at the Boston company, according to the nonprofit Tech Transparency Project.

Though comprehensive, the list does not provide an exhaustive accounting of the Fed’s hiring to date. It also represents the beginning of what promises to be a bigger buildout as the central bank looks to meet digitization objectives with looming deadlines. The Fed is preparing to roll out its FedNow real-time payments system next year and, in accordance with a White House directive issued last month, is weighing the pros and cons of developing its own digital currency.

“We are engaged in research and experimentation on our own and with partners related to payment technologies and digital currencies,” Powell said during the BIS event. “We are hiring people with that kind of expertise at a greater rate, and this is something we will be investing time and money in over the coming years.”

It is unclear how many tech-focused staffers the Fed has added in recent years or how many hires it plans to make moving forward. A Fed spokesperson declined to go into specifics, citing a policy not to discuss staff matters.

So far, all five Circle managers hired by the Fed have taken roles with the Federal Reserve Bank of Boston, as have two other lower ranking ex-Circle employees identified by American Banker through their LinkedIn profiles. A spokesperson for the regional Fed bank declined to comment on its hiring practices.

In 2020, the Boston Fed launched Project Hamilton, a joint effort with the Massachusetts Institute of Technology to study central bank digital currencies. Earlier this year, the partnership announced that it had developed a prototype that could process 1.7 million transactions per second. It plans to spend the coming years improving the system’s privacy, resilience and functionality.

Information-technology positions, especially those focused on security, digitization and cloud migration — the movement of data to shared remote servers — are in near universal demand, as government agencies and private-sector companies are looking to fill such positions, said Thomas Vick, a regional director for the Silicon Valley-based recruiting firm Robert Half.

“It’s hard because there’s so few candidates out there unless you’re going to hire someone away from another organization,” he said. “And then, when you’re a government agency, it can be a little bit more challenging, so we’re seeing those organizations get a lot more creative with what they’re doing to attract the kind of talent that they’re looking for and that they need.”

Along with attractive benefits, a perennial perk of government employment, agencies have taken to offering flexible work schedules, remote-work leeway and, in some cases, paying salaries on par with the private sector, Vick said.

“Sometimes it’s a matter of them reworking their budgets to put more focus on a particular area — maybe it is security. Because they know they need to beef up security around this particular area, they’re willing to devote more budget to that and therefore pay an extremely competitive rate,” he said. “So, there’s not that uniformity across the board where just because you’re going to a government agency or entity that you’re going to take a pay cut.”

Katie Paul, director of the Tech Transparency Project, said sometimes the most logical choice for federal agencies looking to get a better understanding of an emerging technology is hiring individuals who have worked with it in the field. Yet, she said, such hires — particularly by entities with regulatory duties — can also lead to conflicts of interest.

The watchdog group’s report identified 235 legislators, regulators and political operatives who have moved from government positions into the cryptocurrency industry or vice versa. That tally includes 78 people who have gone from financial regulatory agencies — including the Securities and Exchange Commission, Consumer Financial Protection Bureau, Office of the Comptroller of the Currency and Treasury Department — to crypto companies.

Paul said the Fed stood apart by having an influx of former crypto professionals, whereas most agencies in the report saw their staffers going into the industry to advise on potential regulatory changes. She said it is important for agencies to be aware of potential conflicts of interest to avoid crafting regulations in ways that favor specific companies, in this case Circle.

“In some cases, it may make sense to hire people with particular technical expertise to help craft regulation for the crypto industry,” Paul said. “But the hiring of so many from one company raises the possibility that their former employer may be able to influence the government’s approach to regulation.”

Circle has publicly called for greater regulation. Last summer, executives said they hoped to turn the company into a crypto bank, a process that would come with better defined regulatory oversight. This month, the firm’s chief executive Jeremy Allaire told Bloomberg News he hoped to apply for a charter through the OCC “in the near future.”

The company declined an interview for this article. “Circle does not comment on personnel matters,” a spokesperson said in a prepared statement. “Like many leading companies, Circle’s alumni network includes people who have pursued senior positions in public service.”

The issuance and distribution of stablecoins is one of the top focal points for the Fed as well as the OCC and Federal Deposit Insurance Corp., according to a joint statement issued by the agencies last November. The regulators said they plan to provide more clarity about whether it is legal for banks to participate in such activities. If it is, they aim to put out guidance for doing so.

Other high-priority cryptocurrency topics the agencies hoped to weigh in on 2022 include banks’ safekeeping and custody of digital assets, facilitating customer purchases and sales of such assets, making loans collateralized by crypto, and holding of digital assets on their balance sheets.

During the BIS event, Powell reiterated the importance of not only the Fed, but central banks around the world, to be proactive in the regulation of digital assets.

“Central banks will need to continue to play a key role,” he said. “For us, fostering a safe, efficient and widely accessible payment system with a trusted form of money at its core, has really been a crucial aspect, if not the crucial aspect, of all of our missions since our founding.”