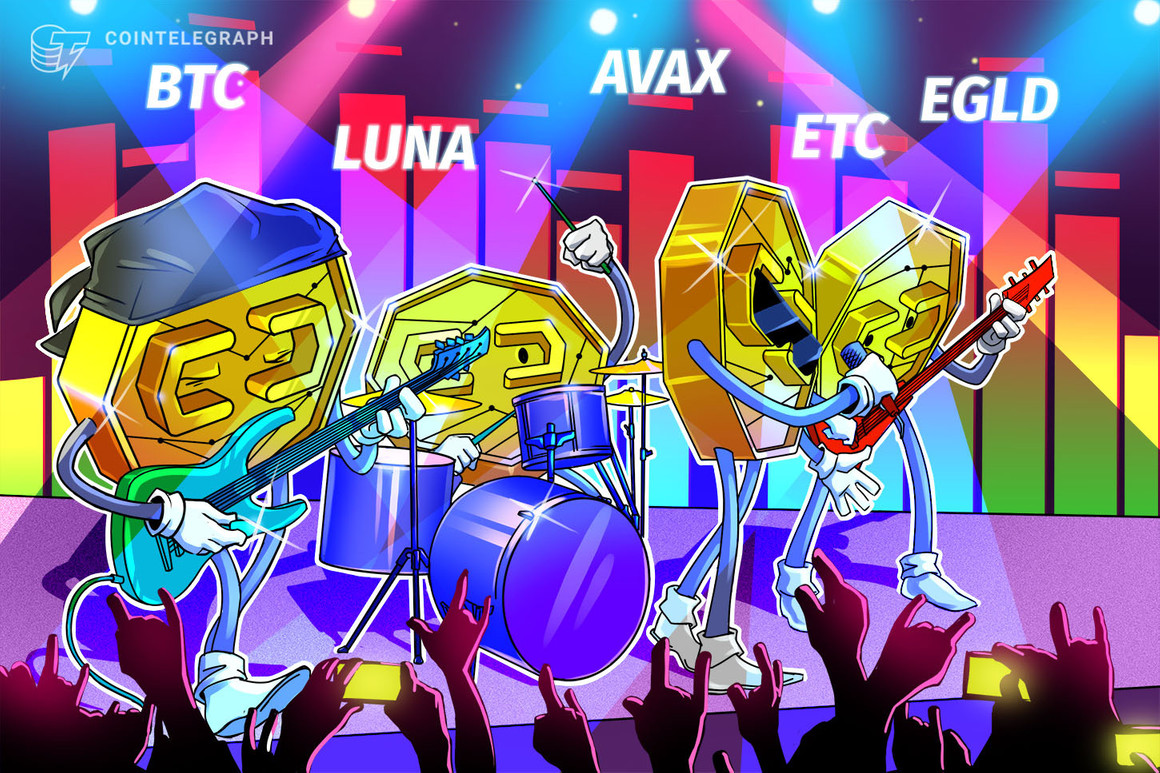 Bitcoin (BTC) rose above $42,000 on March 19 but the bulls continue to face a strong challenge from the bears at higher levels.

Although Bitcoin’s price has recovered from $37,578 on March 13, Cointelegraph market analyst Marcel Pechman highlighted that the long-to-short net ratio of top traders across three major exchanges shows that professional traders have not been buying aggressively.

But while Bitcoin struggles at higher levels, select altcoins are showing strength. Twitter account BTCFuel anticipates that altcoins could be entering “the final leg up of the hype phase” and may peak in the Summer.

Glassnode data shows that investors have withdrawn roughly 550,000 Ether (ETH) from centralized exchanges year-to-date. Due to the outflows, the exchanges’ net Ether balance has plummeted from 31.68 million Ether in June 2020 to 21.72 million Ether.

Could Bitcoin hold above the psychological level at $40,000 and will that shift focus to altcoins? Let’s study the charts of the most notable five cryptocurrencies to find out.

Bitcoin is facing resistance near $42,594 which suggests that traders are cautious at higher levels. The price could now slide to the moving averages, which is an important support to keep an eye on.

If the price rebounds off the moving averages, it will suggest that the bulls are not waiting for a deeper correction to buy. That could improve the prospects of a break and close above the overhead resistance. If that happens, the BTC/USDT pair could rally to $45,400 and later to the resistance line of the ascending channel.

Contrary to this assumption, if the price turns down and breaks below the moving averages, the pair could slide toward $37,000. A bounce off this support will suggest that the pair may remain range-bound between $37,000 and $42,594 for a few days.

The bears will have to pull and sustain the price below the support line of the channel to signal the resumption of the downtrend.

Conversely, if the price slips below the 20-EMA, it will suggest that the short-term traders may be selling near the overhead resistance. That could open the doors for a possible drop to the 50-simple moving average. If this support cracks, the decline could extend to $37,000.

Terra’s LUNA token rebounded off the 20-day EMA ($86) on March 18, indicating strong buying at lower levels. Both moving averages are sloping up and the relative strength index (RSI) is in the positive territory, indicating an advantage to buyers.

If buyers drive and sustain the price above $96, the LUNA/USDT pair could challenge the all-time high at $105. A break and close above this resistance will suggest the resumption of the uptrend. The pair could first rally to $115 and then to $125.

Alternatively, if the price turns down from $96, the pair could again drop to the 20-day EMA. A break and close below this support will suggest that the bullish momentum is weakening. The pair could then slide to the strong support zone at $75 to $70.

The pair has been consolidating between $85 and $96. Although the bears had pulled the price below $85, they could not sustain the lower levels. This indicates strong buying on dips. Both moving averages are crisscrossing each other, suggesting a range-bound action in the near term.

If the price rises above $96, the advantage will shift in favor of buyers and the pair could then rally to $105.

Conversely, if the price turns down from $96, the pair could drop to the moving averages and then to $85. The bears will have to pull and sustain the price below the $85 to $82 support zone to signal the start of a deeper correction.

Avalanche (AVAX) broke and closed above the downtrend line of the descending channel on March 18, indicating a possible change in trend. However, the bears have other plans and are currently attempting to pull the price back below the breakout level.

If the price turns down from the current level but rebounds off the downtrend line of the channel, it will suggest that the breakout is valid. That increases the possibility of a rally to the psychological level at $100. The rising 20-day EMA ($78) and the RSI in the positive zone indicate advantage to buyers.

Conversely, if the price re-enters the channel and breaks below the moving averages, it will indicate that the recent breakout was likely a bull trap. That may catch several buyers off guard, resulting in a possible decline below the uptrend line.

The 4-hour chart shows that the rise above the channel had pushed the RSI into the overbought territory. This may have resulted in profit-booking from short-term traders. The pair could now drop to the 20-EMA, which is likely to act as a strong support.

If the price rebounds off this level, it will suggest that the sentiment has turned bullish and traders are buying on dips. That will increase the likelihood of the continuation of the up-move.

On the contrary, a break and close into the channel will suggest that the bullish momentum has weakened. That could pull the pair down to the 50-SMA.

Related: 3 times in March that savvy crypto traders bought breaking news for the price of a rumor

Ethereum Classic (ETC) picked up momentum after it broke and closed above the downtrend line. Strong buying has pushed the price near the stiff overhead resistance at $38. The bears are likely to defend this level with vigor.

If the price turns down from the current level, the ETC/USDT pair could drop to $32. The 20-day EMA ($28) has started to turn up and the RSI is in the overbought zone, putting the advantage with the buyers.

If the price does not give up much ground from the current level or rebounds strongly off $32, the bulls will again try to clear the overhead hurdle at $38. If they succeed, the pair could rally to $45 and thereafter to $50.

Alternatively, if the price turns down and breaks below $32, the next stop could be the 20-day EMA. A break and close below this level will suggest that bears are back in the game.

The 4-hour chart shows that the pair embarked on a vertical rally after breaking out of the downtrend line. This pushed the RSI deep into the overbought territory. Such overbought levels are usually followed by sharp declines.

The pair could drop to the 38.2% Fibonacci retracement level at $33 and later to the 50% retracement level at $32. The bulls are likely to defend this zone aggressively. If the price rebounds off this support zone, the buyers will attempt to drive the pair above the overhead resistance and resume the uptrend.

The bullish momentum may weaken on a break and close below $32. The pair could then drop to the 61.8% Fibonacci retracement level at $30.

The 20-day EMA ($151) has started to turn up gradually and the RSI has risen into the positive territory. This suggests that the path of least resistance is to the upside. If buyers push the price above $169, the EGLD/USDT pair could extend its up-move to the psychological level at $200. The bears are expected to mount a strong defense at this level.

This positive view will invalidate if the price turns down and plummets below the 20-day EMA. Such a move will suggest that the recent break above the 50-day SMA ($155) may have been a bear market rally. The pair could then again drop to $125.

The bulls pushed the price above the overhead resistance at $160 but the bears quickly pulled the price down and attempted to trap the aggressive bulls. Although the price broke below the 20-EMA, the bears did not build upon this advantage. This indicates strong buying at lower levels.

The bulls have again pushed the price back above $160 and are trying to resume the up-move. The bullish momentum could pick up on a break and close above $169. This positive view will be negated if the price turns down and breaks below $152.

The views and opinions expressed here are solely those of the author and do not necessarily reflect the views of Cointelegraph. Every investment and trading move involves risk, you should conduct your own research when making a decision.