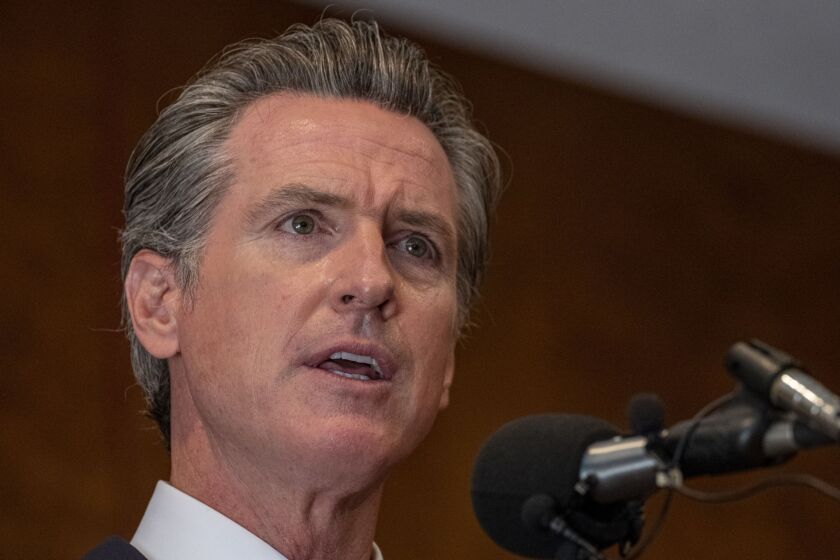 The omicron variant of COVID-19 overshadowed expectations that California lawmakers could spend this budget year focused on how to spend an anticipated $26.6 billion surplus as Gov. Gavin Newsom released his proposed $286.4 billion fiscal 2023 budget.

In a Saturday preview ahead of his Monday budget press conference, Newsom asked lawmakers to immediately approve $1.4 billion in emergency COVID-19 funding.

In addition to the pandemic, Newsom focused on homelessness and a worsening drought as he outlined $10 billion of new spending proposals that included K-12 spending that surpasses records set just last year.

The surplus enables the governor to provide substantial funding in those areas as well as $3.9 billion in supplemental funding to boost efforts to pay down pension liabilities and proposals that he said will save taxpayers $355 million on debt service.

“We have the capacity to invest in our growth engines, invest in the future, as well as making sure that we prepare for the uncertainties that the future presents,” Newsom said during Monday’s press conference.

His initial proposal will be followed by an updated budget proposal in May after which budget negotiations begin in earnest.

“For all the success California has had [in dealing with the pandemic], here is where we are in total cases,” Newsom said. “By the end of this week, we will be at a higher hospital census than we had at the peak of the pandemic last year.”

Nearly 5% of the people who get the omicron variant end up hospitalized, Newsom said.

“We are projecting that are COVID-19 census may increase to 23,000 by Feb. 2, which would be as high as the peak of last January,” Newsom said. “Gives you a sense of where we are, it’s manageable, but it’s challenging.”

When it comes to a pandemic, one must be flexible around changing conditions and challenges, Newsom said.

Republican lawmakers had asked Newsom in a letter Friday to declare a special legislative session devoted to homelessness.

“In past few years, we have put unprecedented amounts toward this issue,” Newsom said. “We can’t solve a decades-long problem in three years. It’s been a busy three years as I’m sure you are aware.”

His spending plan envisions spending $2 billion over a two-year period to get people out of encampments and into shelter immediately and to provide mental health services. The governor called that spending an interim step while the state continues efforts to build permanent housing using the $12 billion included in the 2021-22 budget for those efforts.

“We made a commitment last year to create 44,000 new units and treatment slots,” Newsom said. “We have housed 58,000 through our Homekey program and got another 50,000 off the streets through our room key model.”

“I am not naïve, we need to do more, because we still have tens of millions of people suffering,” Newsom said.

He also emphasized that his proposal will include accountability measures to make sure the money is being used the way he intended to, which was also a key point in the Republican’s letter.

In order for cities to qualify for money to combat homelessness they have to have a plan that is approved by a state agency, Newsom said.

“We are attaching to dollars, a requirement that there is a homeless plan,” he said. “Cities that reach goals can also quality for additional dollars for producing real and tangible results.”

He also plans to spend $4.9 billion on transportation projects including $2 billion for transit and rail projects and $1.25 billion for local projects. He quickly mentioned high speed rail with an aside saying, “We need to finish the job in the Central Valley.”

The budget would include $119 billion in education funding boosting per-pupil spending in California to $20,855. In fiscal 2021-22 roughly $15,000 was spent per student, according to Newsom. He also plans to spend $4 billion on universal preschool.

The budget would also include more than $600 million in new funding for the University of California and California State University campuses, above current general fund support.

Newsom said that he and state lawmakers haven’t reached an agreement, but a new K-12 school bond is being discussed for the mid-term elections in 2022, or possibly the year after. In the interim, Newsom said he included $2.3 billion in the budget to help fund school construction.

He also proposed pausing an expected increase in the gas tax that would come in July. It wouldn’t actually cancel it, but buy it out by using $523 million in tax revenues already collected for the transportation needs that qualify for the funding.