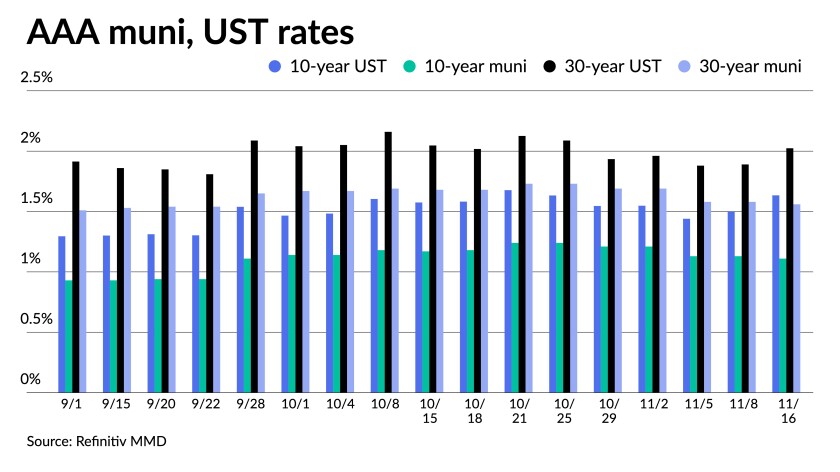 Municipals faced some pressure Tuesday on another day of a weaker U.S. Treasury market while equities made gains. A large new-issue calendar began pricing, with a few deals bumped off the day-to-day calendar.

The 10-year/5-year curve sits below a 50 basis point spread after trading above 65 basis points in early October, she said. July brought a low spread of 42 basis points when the 10-year AAA traded through 0.85%.

“Real yields that now offer buyers 1.25% or higher in the 10-year range have offset an otherwise flatter slope,” she said. “Further out the curve, the 20-year/10-year slope has moved to its flattest of the year, currently at 25 basis points. When the year began, the slope was a 49 basis points corresponding to 20-year yields below 1.25%.”

The post-payroll market has taken on an unclear focus, she said, as munis have largely held onto a slightly steady tone while USTs have been erratic. Supply is just one component the market will weigh where rates are concerned. Thirty-day visible supply sits at $9.62 billion. Another factor with relevance to rate direction is the demand component, including fund flows and scheduled redemptions, Olsan said.

“A turnaround in waning muni flows (Lipper reported $1.9 billion in the first week of November, more than triple the previous week) and heavier December reinvestment needs (projected calls and maturities are $30 billion) could provide enough support to hold yields in a narrower range,” she said. “Add in the back-and-forth dialogue with the second round of infrastructure and tax consequences, and it doesn’t take much to explain bidders’ lack of conviction in either direction.”

It was a larger new-issue day with a variety of credits coming in both the negotiated and competitive markets.

Powell or Brainard?
A decision about who will lead the Federal Reserve for the next four years is expected before Thanksgiving and could come sooner, with no hints as to whether President Biden will retain Jerome Powell or promote Gov. Lael Brainard.

Late Tuesday when asked the president said, “you’re gonna hear that in about four days.”

“Based on how markets reacted when they learned Brainard was in the running, it’s clear who’s viewed as the more dovish between the two,” said Craig Erlam, senior market analyst, UK & EMEA, at OANDA. “Ordinarily, that would make her the stock market’s pick, but that may not necessarily be the case if investors view inflation as a greater risk than the central bank perceives, making inaction the less desirable approach longer term.”

Expectations are Powell will be renominated, but Megan Horneman, director of portfolio strategy at Verdence Capital Advisors, said Biden has three objectives: keep the Fed dovish and interest rates low, which helps his spending agenda; address inflation concerns; and “satisfy progressive Democrats over getting tough on banking regulation.”

Despite the annual rotation of voters on the Federal Open Market Committee, she said, “the members rotating are an even mix of doves and hawks. Therefore, who President Biden picks for the vacant/replacement seats and Fed Chair can move the FOMC in the way he prefers.”

And inflation remains an issue, despite a 1.7% surge in retail sales in October. “Inflation is getting in consumers’ heads,” said Wells Fargo Securities Senior Economist Tim Quinlan and Economist Shannon Seery. “This was already evident in the recent deterioration in consumer sentiment, but if you look carefully, you can now see it in the hard data as well. If price gains outstrip spending increases, that implies a volume decline.”

While fuel prices soared 6.1%, gasoline sales (not adjusted for inflation) grew 3.9%, which “suggests that consumers may be starting to combine trips or otherwise limit their driving,” they said. Similarly, restaurant spending was steady despite a 0.8% climb in consumer prices for food away from home.

“Consumers are still going out to eat, but perhaps some diners are moving down the price curve from upscale full-service dining experiences toward more humble fast-casual options,” Quinlan and Seery said.

Inflation and supply chain issues could be moving forward holiday spending, with several warnings about empty shelves if consumers wait too long and the threat of delivery delays prompting earlier gift buying.

“The concern is that rising inflation and souring sentiment could hamper consumer activity later in the year,” said Grant Thornton Economist Yelena Maleyev. “We expect supply chain concerns to remain elevated into 2022. The Federal Reserve could move up its first rate hike to the first half of next year.”

Also, the National Association of Home Builders housing index rose to 83 in November from 80 in October.

The service sector in the New York region saw modest growth, according to the Federal Reserve Bank of New York’s Business Leaders Survey. The business activity index gained to 15.9 on November from 15.2 in October, with the business climate index remaining negative.

The number of employees index slipped and wages grew.

The Successor Agency to the Redevelopment Agency of the City and County of San Francisco (/AA///) is on the day-to-day calendar with $107.34 million of taxable third-lien tax allocation social bonds, 2021 Series A (affordable housing projects), serials 2023-2031, insured by Assured Guaranty Municipal Corp. Citigroup Global Markets.