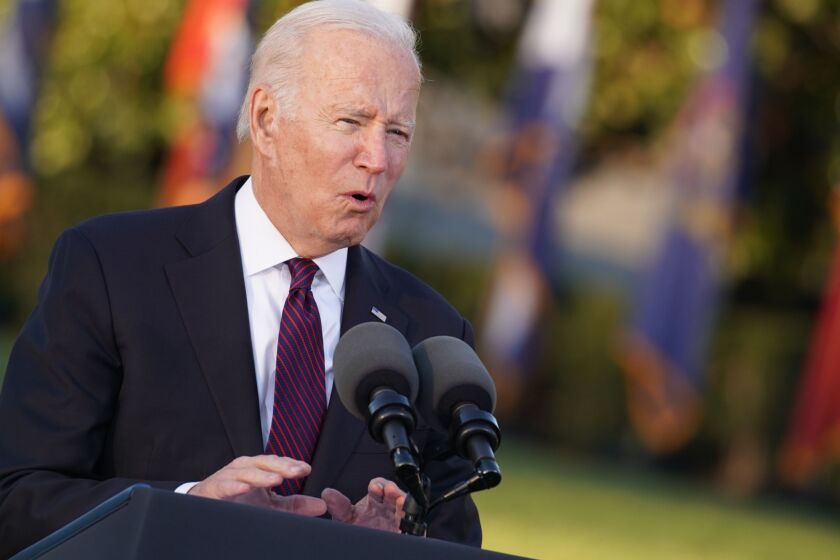 President Joe Biden Monday signed into law a $1.1 trillion infrastructure package that will infuse billions into state and local governments.

“We’re taking a monumental step forward to build back better as a nation,” said Biden at a White House ceremony attended by lawmakers, governors, mayors and others. “Things are going to turn around in a big way.”

The bipartisan Infrastructure Investment and Jobs Act, approved by the House in November and the Senate in August, features $550 billion for reauthorization of surface transportation infrastructure spending and another $550 billion for assets ranging from bridges, drinking water, public transit, broadband, rail, electric vehicle chargers, ports and airports.

House Speaker Nancy Pelosi, speaking at the signing ceremony, called the bill the “biggest, boldest investment in our country’s history.”

Supporters say the program will generate thousands of new jobs, grow the economy and make the US more globally competitive.

For the municipal bond market, the infusion of federal money is expected to boost state and local credits. It may also accelerate local projects and lift new money supply as issuers take advantage of the federal cash by borrowing to jumpstart their own projects, said market participants said. Municipal Market Analytics projects the new law could boost 2022 new-money issuance to more than $300 billion, up from a pre-infrastructure bill estimate of $275 billion.

The package also doubles private activity bond volume for surface transportation projects to $30 billion from $15 billion, allows the use of PABs for broadband and carbon capture projects, and features other provisions that are expected to boost public private partnerships.

“Today is a monumental day for infrastructure across the country. We look forward to working with the administration to track the funds and get the infrastructure investments where they need to go,” said Emily Brock, the Government Finance Officers Association’s federal liaison.

The Department of Transportation will allocate the money. In a Nov. 8 White House briefing, Transportation Secretary Pete Buttigieg said the agency would focus on supporting projects that show “economic strength, safety, climate, equity, and preparing for the future.”

The legislation will be paid for with various revenue streams, including more than $200 billion in unspent coronavirus funds.

The bill had been held up for weeks in the House as moderate and progressive Democrats hammered out differences on a companion bill, the $1.75 trillion Build Back Better legislation. With the infrastructure bill now law, all eyes will turn to Build Back Better, which the House has said it may vote on as early as this week. Moderate Democrats want to wait for a full score from the Congressional Budget Office, which has said it would have by Friday.

Stocks making the biggest moves premarket: Baidu, MicroStrategy, Moderna and more
SEC charges Texas official with falsifying financial statements, misleading investors
Sam Bankman-Fried provides bailouts, ‘Bitcoin dead’ searches soar, and debate over hidden themes behind BAYC continues: Hodlers Digest, June 19–25
How They Closed It: Closing The Loop On One Of Aspen’s Most Expensive Deals Ever
Mortgage demand is now roughly half of what it was a year ago, as interest rates move even higher