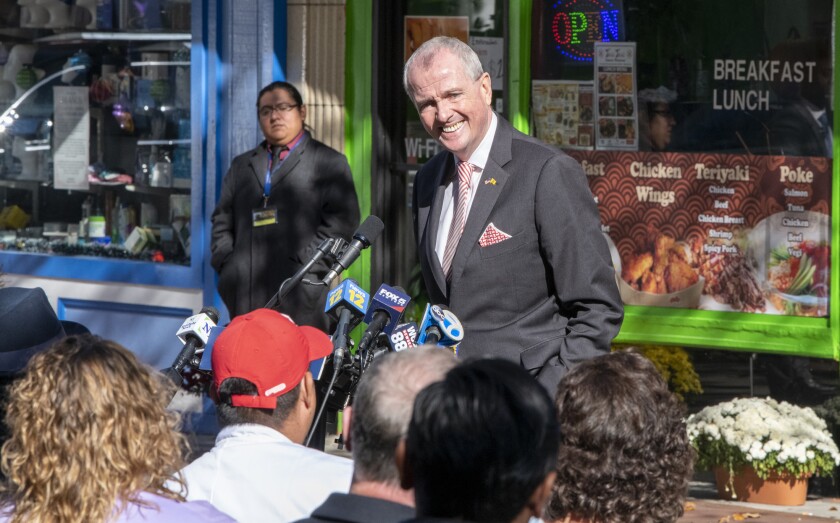 National pundits flagged the election-night drama, along with Republican Glenn Youngkin’s gubernatorial victory in Virginia over Terry McAuliffe and other developments, as warning signs for Democrats heading into national midterm elections.

New Jersey dynamics included sour voters reeling from inflation, high taxes and the lingering COVID-19 pandemic; a TV campaign by Republican gubernatorial challenger Jack Ciattarelli that showed Murphy dismissive about taxes; and even the exposed underbelly of traditional polling in the digital and COVID eras.

“The narrow win for Murphy and Sweeney’s defeat show that voters do not like inflation,” said David Fiorenza, a Villanova University adjunct faculty professor of practice for economics. “They vote with their wallets and higher food, energy and other prices hit the middle class very hard.”

“An angry electorate that’s enraged takes it out not in the polls but in the ballot box,” said Egea, chief of staff under Murphy’s predecessor, Republican Chris Christie.

Ciattarelli has scheduled a Friday press conference with multiple media outlets saying he will concede. He trails Murphy by an estimated 2.9%, or about 74,000 votes, according to The Associated Press.

Sweeney, D-West Deptford, elected senator in 2001 and its president since 2010, conceded on Wednesday to Edward Durr, a truck driver for furniture retailer Raymour & Flanigan. Durr, 58, spent less than $10,000 on his campaign, according to media reports, and shot his videos from a smartphone.

“I feel like I’m about to throw up,” Durr told reporters at GOP headquarters in Gloucester County right after Sweeney conceded. He called Murphy “a dangerous guy armed with a bunch of executive orders.”

The Senate was scheduled to meet as early as Friday to select Sweeney’s replacement as president. Nicholas Scutari, D-Linden, is a heavy favorite.

Murphy, armed with a fresh four years though now term-limited, became the first Democratic governor re-elected in the state since Brendan Byrne in 1977. He must release his fiscal 2023 budget to lawmakers around early February.

The $46.4 billion FY2022 plan included a $3.7 billion transfer from the general fund to the nascent New Jersey Debt Defeasance and Prevention Fund, and a nearly $7 billion contribution to the public pension fund.

“The markets are going to wait and see between Murphy and the legislature as to what’s next. They will be waiting for clues,” said Howard Cure, director of municipal bond research for Evercore Wealth Management.

“Does this push the legislature and Murphy to the more moderate side? That’s the tension, the progressives versus the moderates.”

While the liberal Murphy no longer has to face voters, lawmakers may hear footsteps back home. That bears watching during budget season.

“Legislators need to worry what they see in their districts, what they hear from the voters and modify and temper their agendas,” Egea said. “Murphy, I believe, will continue in his current trajectory.”

Fiorenza, meanwhile, expects Murphy to drift toward the center with his focus on the 2024 national election.

Sweeney, a union ironworker, was a moderate counterweight to Murphy, differing with the governor over raising income taxes on wealthy individuals and pushing pension changes unpopular with state employee unions. His district lies across the Delaware River from Philadelphia.

“Northern New Jersey is such a contrast from South Jersey,” Fiorenza said. “Most of South Jersey cannot relate to the North Jersey-New York way of living with companies on Wall Street.”

Sweeney survived a challenge in 2017 from the New Jersey Education Association. It backed Republican Fran Grenier, who didn’t come close to winning.

“He was pushing for things like regionalism of school districts, as opposed to boroughs and townships having their own schools,” Cure said of Sweeney.

Murphy has some tailwinds at his back as he starts his second term. New Jersey received $9 billion of federal aid over three rounds, tax collection receipts came in above projections, the state made its first full pension contribution in decades and rating agency feedback of late has been favorable.

New Jersey, though, is still one of the nation’s lowest-rated states.

“What are they going to do about various expensive programs once the federal monies are gone? That’s a big question,” Cure said.

Rating agencies are watching for increased reliance on non-structural budgeting, and how the state can cushion the budgetary impact of expiring federal pandemic relief. Also, whether revenue growth from post-pandemic economic recovery is consistently below inflation.

“These were only outlook changes,” Egea said. “The ratings themselves haven’t changed.”

A September survey of more than 540 certified public accountants by the New Jersey Society of CPAs said reducing or capping increases on property taxes was the highest election priority. Auditing state agencies and programs for overspending ranked close behind, followed by waste and revenue allocation and improving infrastructure.

Rounding out the top five were eliminating the pension system for all new public sector workers and replacing it with a 401(k)-style defined benefit plan, and reducing regulations and red tape for businesses statewide.

“The other big issue that I think about in New Jersey is infrastructure,” Cure said. “NJTransit will benefit from the new federal infrastructure bill.”

A Ciattarelli TV campaign, which also ran on New York and Philadelphia stations, showed Murphy at a Rowan University public forum in 2019 saying: “If tax rate is your issue, either a family or a business, we’re probably not your state.”

That resonated at youth soccer games, house parties and the like, according to Egea.

“People were saying, ‘He didn’t say that, did he?’ Then when they saw it, they were in disbelief,” she said.

The closeness of the race shined a harsh glare on pollsters, many of whom had put Murphy in a double-digit lead right up to election day.

“I blew it,” Murray wrote. “The final Monmouth University Poll margin did not provide an accurate picture of the state of the governor’s race.”

While Democrats maintained their two-decade grip on the legislature in Trenton, with some vote-counting still going on, Republicans gained back some ground.

Five of the seven GOP pickups were female candidates. “It was a great evening for female Republicans,” Egea said.

One of the others was former Atlantic City Mayor Don Guardian, who became the first Republican openly LGBT member elected to the Assembly.

All new seats will be for two years, the norm for Assembly members. Senators serve four-year terms except at the start of a decade, when they serve two years to reflect the redrawing of legislative districts.

New Jersey and Virginia were the nation’s only governor’s races this year.