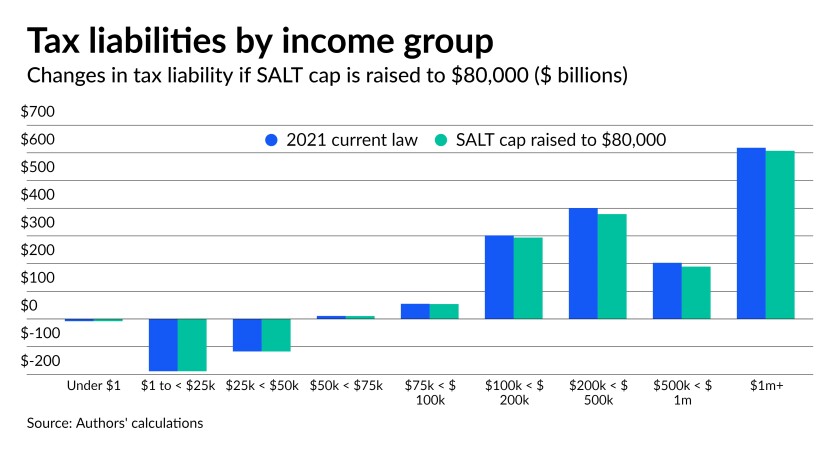 Raising the cap on state and local tax deductions to $80,000 from $10,000 would reduce the federal income tax liability by $55.9 billion in 2021, making it less concentrated among those with the highest incomes and making it $35.3 billion cheaper for the government than repealing the SALT cap altogether.

That was the takeaway from a new report by Donald J. Boyd, principal of Boyd Research LLC and co-director of the State and Local Government Finance Project at the University at Albany and Matt Jensen, director of the Open Source Policy Center at the American Enterprise Institute.

The $10,000 SALT cap currently in place was set by the 2017 Tax Cuts and Jobs Act passed by Republicans. The $80,000 proposal is being advanced by Democrats in the Build Back Better reconciliation bill.

While the change in tax liability is skewed toward the upper income brackets and states with higher taxes, raising the SALT cap to $80,000 “would reduce the revenue loss, make it less concentrated among the highest income households and spread the tax revenue slightly more broadly across states,” the report said.

“The average change in tax liability would be skewed towards upper incomes,” the report said.

“Average tax reductions with positive liabilities range from $1,338 in Connecticut to $61 in Alaska,” the report said. States that would see little benefit from the SALT cap raised to 80,000 include Alaska, Wyoming and North and South Dakota.

The difference between raising the cap to $80,000 and repealing seems to only affect those taxpayers with adjusted gross incomes of $1 million or more.

Sen. Bernie Sanders, I-Vt., and Sen. Bob Menedez, D-N.J., proposed their own SALT overhaul that would focus more on easing pressure on the middle class while leaving the tax in place for top-income earners. Their plan would keep the $10,000 cap in place for families with at least $400,000 in income.

Senate majority leader Chuck Schumer outlined his proposal last week to eliminate the cap for five years and reinstate the $10,000 cap in 2026.

“Whether Congress will alter the SALT cap remains to be seen,” the report concluded.