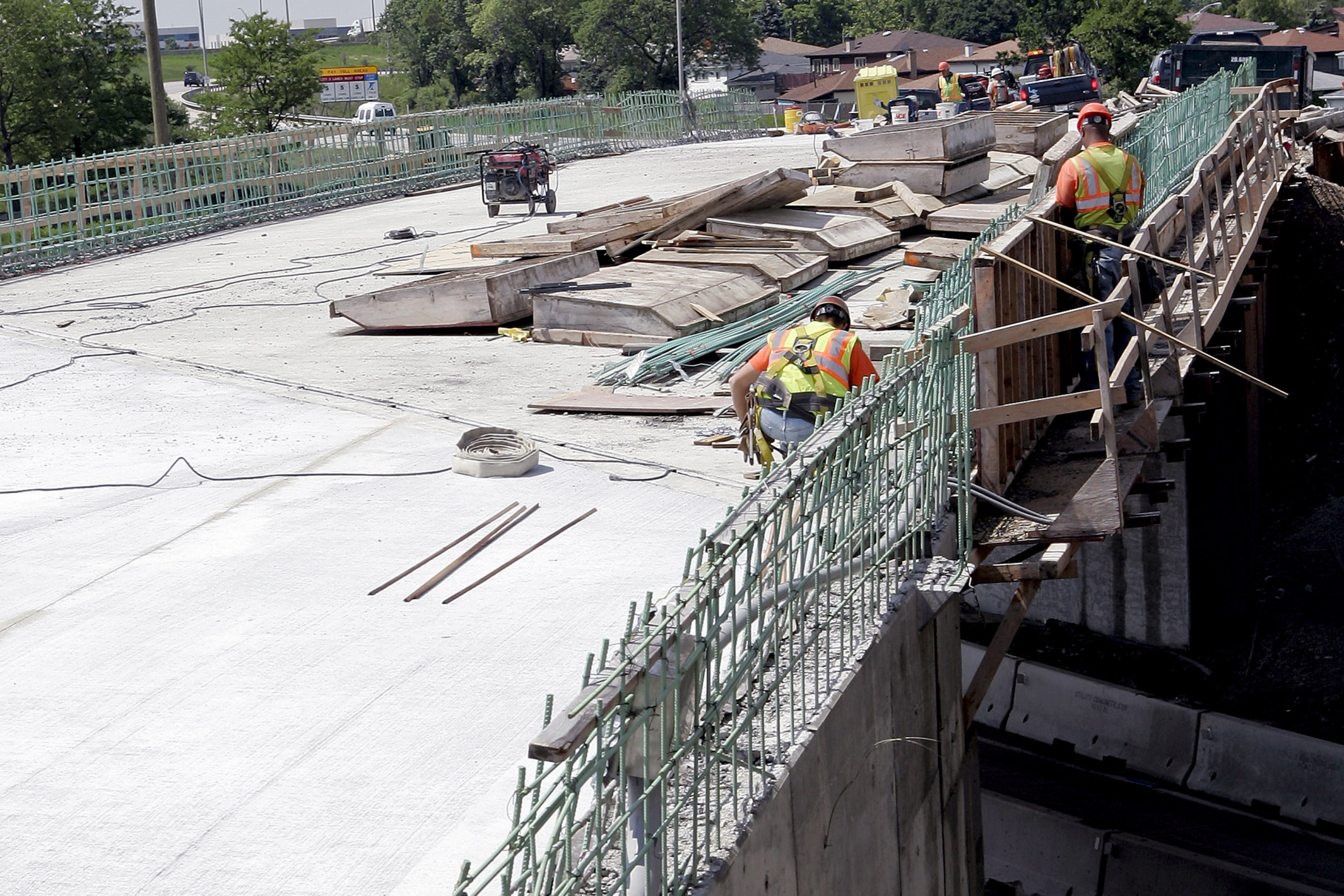 The jockeying has begun among Illinois political leaders, labor and planning organizations as they stake out their priorities for the state’s more than $17 billion share of the $1.2 trillion infrastructure bill that awaits President Biden’s signature.

“We stand united here today in calling others to join in making this project a priority. This becomes a reality if and only if federal transportation officials join with state and local leaders in providing resources” and the passage of the legislation “is a tremendous step forward,” Harmon said at a news conference Tuesday hosted by the Rebuild 290 Coalition.

In an initial briefing call with federal transportation authorities, Harmon said participants were asked to identify and advocate for transformative projects.

State lawmakers passed a resolution in June seeking federal aid to speed up engineering studies and construction but the project has remained stalled amid a lack of state funds. State transportation officials have eyed tolled specialty lanes and a public-private partnership.

The project represents just one that officials are trying to line up for the flood of funding from the Infrastructure Investment and Jobs Act.

Illinois-based stakeholders have been clamoring for money to bolster water infrastructure, airports, transit and road and bridge projects, and broadband expansion. Officials say they are awaiting guidance but that hasn’t stopped early maneuvering.

Competitive grant allocations in the bill may add to the $17 billion headed Illinois’ way. All 13 Democrats in Illinois’ House delegation voted for the deal while just one of five Republicans joined them.

The package allocates Illinois $1.7 billion over five years for drinking and wastewater infrastructure, $9.8 billion in for federally aided highway projects, $1.4 billion for bridge replacement, $4 billion for public transportation projects, $100 million for broadband expansion and $149 million for an electric vehicle charging network, according to a statement from U.S. Senators Dick Durbin and Tammy Duckworth, both Democrats.

The water funding will likely flow through the state revolving fund that is managed by the Illinois Finance Authority which is reviewing the impact of the federal package with allocations for both lead replacement and general infrastructure.

Chicago’s five-year capital program heavily relies on debt to cover $11.2 billion in spending with key funding pieces coming from $2.8 billion in planned water and wastewater borrowing, $2.4 billion of aviation debt and $1.8 billion of general obligation borrowing. State funds account for $638 million and federal funds for $753 million and $1.3 billion has not yet been identified, according to the Chicago Civic Federation.

The city has new money and refunding GO, water and sewer and airport deals in the works for next year so any new funding could supplement existing plans and fill gaps.

Chicago Mayor Lori Lightfoot has been eyeing how to pay for lead pipe replacement to homes amid a funding drought and current focus on rebuilding the existing city-owned main lines. Direct service lines are the responsibility of homeowners.

Last year the city took initial steps toward what may shape up to be a long-term $8.5 billion program to replace lead-based water service lines in the city by funding several modest programs with limited costs. Lightfoot said it was too early to talk about future water revenue borrowing or rate hikes as the plan expands in the coming years.

The need for infrastructure upgrades and lead line replacement extends outside Chicago’s borders and was underscored recently by the impoverished suburb of Dixmoor’s loss of water pressure and boil orders due to faltering infrastructure that led to leaks. Dixmoor receives its water from Harvey, which contracts with Chicago to provide treated Lake Michigan water. Dixmoor and Harvey traded blame over the crisis. Neither can afford system upgrades.

The CTA and other service boards that operate commuter rail and suburban bus service will benefit from the $1.75 billion allocation in the package being directed toward improving accessibility, funding that was championed by Duckworth, an Army veteran who lost her legs to war injuries.

The CTA also continues to look for funding sources for future phases of its Red Line extension plans. The $2.1 billion first phase of rebuilding the Red Line along with its adjacent Purple Line on the north side of the city is in place with more than half coming from federal grants.

Chicago has $11 billion in capital projects proposed at O’Hare International Airport including an $8.5 billion terminal overhaul announced in 2018. A new money and refunding is planned for next year and the potential for additional future grants would offset the projects’ impact on airlines and could speed up project spending.

At the state level, the road and bridge infusion will supplement a six-year, $45 billion infrastructure program approved by lawmakers at the behest of Gov. J.B. Pritzker in 2019. The package authorized $23 billion of new borrowing capacity including $20 billion of GOs and $3 billion of sales-tax backed paper which the state has been tapping over the last two years.

“Thanks to this historic investment, we will be able to widen the scope of our historic Rebuild Illinois capital program,” Pritzker said in a tweet after the House’ passage.

The Illinois Department of Transportation said it is looking for when additional federal guidance becomes available.

Illinois is the top recipient of direct allocation behind California, Texas, New York and Florida. Other leading recipients in the Midwest include Ohio which expects $11 billion and Michigan which expects more than $10 billion.