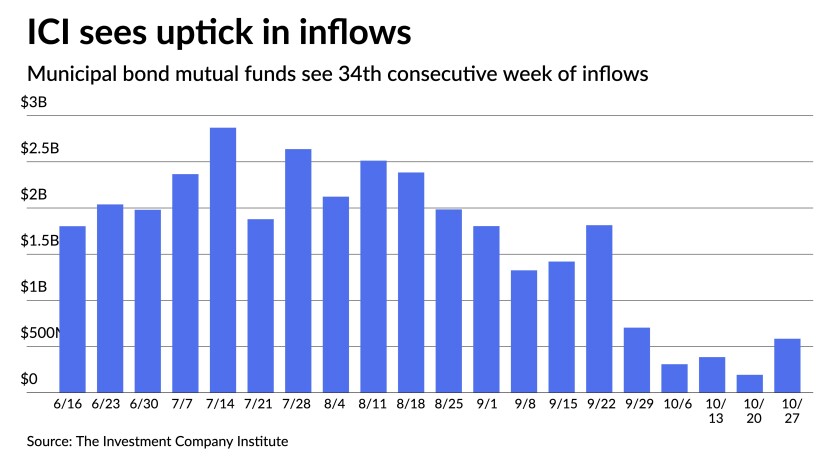 On a day when the Federal Open Market Committee made taper official, equities hit all-time record highs and U.S. Treasuries lost ground, while municipals made gains early on and stuck with them in an actively traded secondary.

High-grade benchmark yields fell one to three basis points while USTs ended the day higher after an up-and-down trading session that moved the 30-year back above 2%, but still inverse to the 20-year.

Secondary market trading was stronger to start the day and carried throughout. Trading post-FOMC fell off slightly as participants digested the FOMC news and held back on making any big moves, though some firmer prints out longer were seen. Secondary trading was elevated near 12% over Tuesday’s levels.

The municipal market had a slightly stronger tone along the curve as ratios have cheapened to levels not seen in a while, according to Roberto Roffo, managing director and portfolio manager at SWBC Investment Company.

“After the weak muni market we have experienced [in recent weeks] and the cheapened ratios, I would expect the trend we are seeing today to continue as the strong technical and fundamentals remain for the time being,” Roffo said. “Investors are using accumulated cash from the strong inflows and are purchasing primary and secondary offerings that have better structures in terms of coupon and calls.”

New issues are mixed as some of the cheaper deals are getting done and others are cheapened to clear the market, Roffo noted.

While munis ended the day stronger, this market often lags larger UST movements. Participants said they will be watching whether the Treasury market pressures seen today will continue and how that may affect munis in the coming sessions.

Treasuries were weaker and equities were up at the close.

The average seven-day simple yield for the 150 tax-free and municipal money-market funds sat at 0.01%, the same as the previous week.

The statement said the Fed expects to reduce the purchases by those amounts every month, but will make changes if needed as the result of economic outlook changes.

“It’s clear they want to wrap up the asset purchase program sooner rather than later, a slightly hawkish outcome,” said Tom Garretson, senior portfolio strategist at RBC Wealth Management. “However, the Fed’s policy statement offset any hawkish tone from tapering as the key question for markets surrounding this meeting was how they would characterize inflation that has thus far clearly proved more persistent than many had expected.”

The panel also held the fed funds rate target at a range of zero to 0.25%. The vote was unanimous.

In the statement, the panel acknowledges “sizable price increases in some sectors,” but sees supply chain issues easing, which will lead to reduced inflation.

“While there is no announced plan to accelerate the timetable for raising interest rates sooner than late 2023, the ‘dot plot’ from the November meeting likely will be supported by additional members of the FOMC to begin raising rates sooner,” he predicted. But don’t expect any hikes before the November 2022 elections, Skancke said.

“Fed funds future markets — showing an increasing probability of three rate increases in 2022 (June, September and December) — are expecting either an early completion of tapering or the FOMC having a very different sense of urgency in addressing inflation that would warrant an interest rate increase so close to mid-term elections,” he said.

In his press conference, Fed Chair Jerome Powell said supply chain issues will resolve and inflation will drop closer to the 2% target, although “timing is highly uncertain.” He asserted taper has no direct impact on liftoff plans and the test for liftoff hasn’t been met on the employment side and wasn’t discussed at the meeting.

When asked if the markets were correct in assuming two rate hikes next year, Powell said the timing of hikes will depend on the economy “and we can be patient.” Maximum employment could be reached by the end of next year and supply chain issues should be resolved in time to allow inflation to decline in the second half of the year.

“We think the market has priced in too much policy tightening in 2022, with slightly more than two rate hikes expected by the end of next year,” said RBC’s Garretson. “The end of tapering won’t automatically mark the transition to rate hikes. We maintain our view that the Fed will end its asset purchase program in June of next year, before taking some time to reassess the incoming data and the economic and inflation outlook, supporting our view that one rate hike by the end of 2023 should be the base-case expectation.”

“The Fed bought themselves an option,” by stating the taper schedule may be adjusted, said John Luke Tyner, a fixed income analyst at Aptus Capital Advisors.

Whether Powell is renominated will be interesting to watch, he said.

“We are getting down to the final minutes as far as the process goes,” he noted. “The market still seems to strongly believe Jay Powell will get the renomination (according to betting odds).”

When asked, the chair wouldn’t elaborate on what conditions would merit a change in the taper pace, not would he comment on the risks of the taper needing alterations.

“As expected, the taper is now a reality, and the question is when the Fed will raise rates and how many times,” said John Farawell, managing director and head of municipal trading at Roosevelt & Cross. “The chairman spoke of risk management which acknowledged the uncertainty and challenges moving forward. But the same questions remain — is inflation transitory? Will supply chain continue longer than expected?”

Also released, the Institute for Supply Management’s services index soared to 66.7% in October, a series high, from 61.9% in September. Economists expected 62.1%.

Employment slowed but was still expanding and business activity gained.

When viewed in conjunction with ADP report, Levy said, it bodes “well for employment growth in October. Businesses are ramping up employment to meet production needs and staffing requirements in anticipation of what is likely to be a strong retail season.”

Wells Fargo Securities Senior Economist Tim Quinlan and Economist Shannon Seery said, “Activity has never been more fast-paced, demand shows no signs of slowing, prices show no signs of falling, good help is hard to find and the wait time for supplies is ever long.”

The prices index climbed again and is at its second highest ever level.

Separately, new factory orders rose 0.2% in September after a 1.0% climb in August. Economists expected a 0.1% increase.

The Successor Agency to the Redevelopment Agency of the City and County of San Francisco (/AA///) is on the day-to-day calendar with $107.34 million of taxable third-lien tax allocation bonds, 2021 Series A (affordable housing projects) (social bonds), serials 2023-2031, insured by Assured Guaranty Municipal Corp. Citigroup Global Markets.

UK risks being a ‘rule taker’ on tech regulation, warns CMA chief
Here’s why this housing downturn is nothing like the last one
Top 5 cryptocurrencies to watch this week: BTC, SOL, LTC, LINK, BSV
Bitcoin futures enter backwardation for the first time in a year
Wisconsin debt manager Dave Erdman readies move to Baker & Tilly