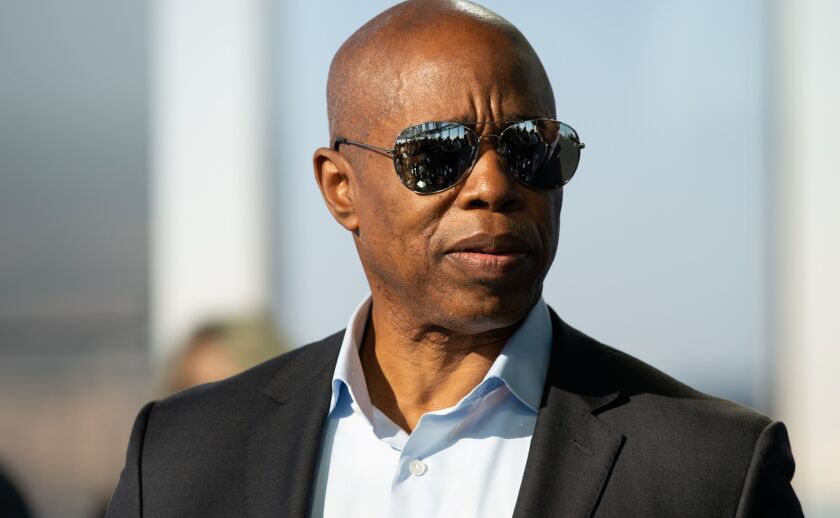 As the lights and tumult died down, New York City Mayor-elect Eric Adams stood among his supporters at his campaign headquarters in Brooklyn and looked out over the crowd.

Just having defeated Republican Curtis Sliwa, by a 73% to 23% margin Tuesday night, Adams felt it was time to bring home his message of unity to a deeply divided electorate.

He stressed it is time to end these divisions that split the people of the city and come together.

“Today we take off the intramural jersey and we put on one jersey together — ‘Team New York,'” he said.

Joined onstage by New York Gov. Kathy Hochul, Adams showed what he wanted a city-state relationship to become — one that was more cordial and more effective than the recent one.

Hochul contrasted the relationship she and Adams will forge with the contentious and acrimonious battles that played out between Mayor Bill de Blasio and former Gov. Andrew Cuomo over the past eight years.

“I’m here to declare there is a new day dawning and a whole new era of cooperation — where the only thing that the city of New York and the state of New York are fighting about is fighting to make your lives better,” Hochul said. “We’ll fight for you and not fight each other anymore.”

In the city comptroller’s race, Democrat Brad Lander defeated Republican Daby Carreras. He will succeed Scott Stringer who was term limited out office after two terms.

The City Council will see a large turnover as well due to term limits, with many, such as Council Speaker Corey Johnson and Finance Chair Daniel Dromm, leaving in January.

New York City is one of the largest issuers of municipal bonds in the country. The next mayor will face a myriad of risks and opportunities in keeping the city on a prudent and sustainable fiscal path.

There are many challenges in guiding the city though the lingering effects of the COVID-19 pandemic, according to Howard Cure, director of municipal bond research for Evercore Wealth Management.

They include the future of office space and its effect on property-tax revenue, and what to do with $14 billion in federal rescue aid that the city has yet to spend or commit.

“The city may want to re-examine its reliance on the property tax,” Cure said.

Another variable is Adams’ ability to coordinate with lame-duck Mayor Bill de Blasio, according to Cure. The two differed over de Blasio’s elimination of a program for gifted students. “It would be nice if they were coordinating together,” he said.

Andrew Rein, president of the watchdog Citizens Budget Commission, called on Adams to “manage the hell out of city government,” with priority in core areas “education, safety, health, sanitation and the New York City Housing Authority.

“He has to manage performance and get the most out of his administration, through the commissioners and down through the agencies,” Rein said.

Managing wisely, he said, includes making the best use of the federal aid.

“The city needs to spread it out to provide time to restructure, focus it on the best uses and track and manage it with data to first identify what the expected results should be and then monitor and manage to get them.”

Preparing for the future, said Rein, includes building out the rainy-day fund for which city voters approved in a 2019 referendum. After the city’s $500 million deposit in the fiscal 2022 budget, its balance is nearly $1 billion.

The city traditionally has used other reserve accounts.

Adams favors amending the rainy-day law to require the city to make rainy-day deposits during economic growth and limit withdrawals during recessionary periods.

“The state law that passed was too loose,” Rein said.

Speaking at a CBC candidates forum earlier this year, Adams said he would name an “efficiency czar” to scope out the city budget. Such a person, he said, could examine contracts valued at more than $10 million.

These would include “everything from cellphone contracts to insurance contracts,” Adams said. The procurement process, he added, should emphasize “best value and not just lowest cost.”

According to Adams, the city could save roughly $1.5 billion annually through the kind of attrition former Mayor Michael Bloomberg executed from 2002 through 2013.

In last week’s debate, Adams said, the city could save up to $3 billion annually through a program to eliminate the gap, or PEG initiative aimed at cutting up to 5% of budgets.

“His first issue will be the city budget,” said Kathryn Wylde, president of the business organization Partnership for New York City. Adams must present his preliminary budget in late January. That launches a three-step plan for passage of a spending plan due June 30.

“He’ll need to cut long-term programs and people that have been put in place with federal funding,” Wylde said. “His first set of decisions will be to look at the fiscal 2023 budget, what to cut or what taxes to raise.”

In the comptroller’s race, Lander, a three-term City Council member from Brooklyn, was the favorite to win in a city where Democrats outnumber Republicans 7-to-1.

He cited Cornell Tech at Roosevelt Island and the Brooklyn Navy Yard buildout as job-creation models and cited the latter as an example of “outer-borough economic development.”

The first agency he would audit, he said, would be the Department of Correction, which spends an estimated $447,000 per incarcerated person annually.

Lander added he would take a wait-and-see stance on cryptocurrency, such as bitcoin.

“It makes no sense to get way out in front when you don’t know if it’s stable,” he during the debate. “The comptroller has to take a long-term view. You’re not a day trader.”

The city’s five major pension funds — city employees, police, fire, teachers and Board of Education — are valued at $273 billion overall. The comptroller is custodian of the funds and serves as Trustee on four out of the five. The comptroller is also investment advisor to all five pension boards.

In other election results Tuesday, there were several mayoral results of note in the Northeast.

In Buffalo, it looked liked Democrat and socialist candidate India Walton lost to the city’s long-time incumbent mayor Byron Brown, who mounted a write-in campaign after Walton won the Democratic primary in June.

In Massachusetts, Boston voters chose Democrat Michelle Wu, the first woman and the first person of color, to become their next mayor. She defeated fellow Democrat Annissa Essaibi George.

And in New Jersey, voters went to the polls to elect a governor. At press time it was still too close to call as to who was the winner — incumbent Democrat Phil Murphy or Republican challenger Jack Ciattarelli.