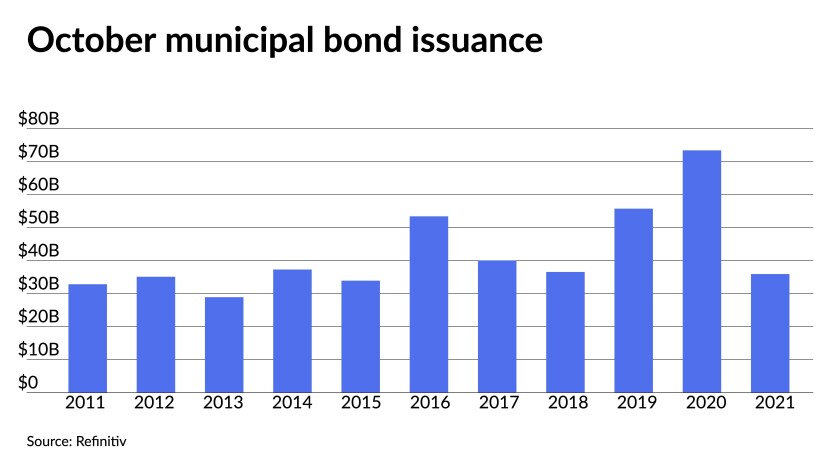 October municipal bond volume fell 51% year-over-year, but was on par with a 10-year average as last year’s figures were skewed by COVID-19 market interruptions earlier in the year and the presidential election.

Some analysts point to the overall lower issuance figures as a symptom of issuers sitting on the sidelines, awaiting a potential tax and infrastructure package from Washington. The absence of muni provisions in the package now being debated may alter issuance trends going forward.

Over the last 10 years, October has, on average, been the heaviest new-issue month of the year. The drop in overall issuance can be credited to the influx of federal COVID-relief dollars as issuers continue to contemplate when and how to use them.

Analysts said the lower volume, particularly taxables, was also led by issuers sitting on the sidelines, waiting for a potential package from Washington, D.C. that would include the restoration of tax-exempt advanced refundings and other municipal provisions. But with the muni bond provisions wiped out of any major tax or infrastructure legislation, a taxable/refunding uptick may greet investors in November and into 2022.

“I would not be surprised to see an uptick in taxable issuance,” said Patrick Luby, senior municipal strategist at CreditSights.

With the exclusion of muni provisions, Luby said the “only game in town” is taxable refundings. The wait-and-see approach that many issuers have taken over the past few months may well be over.

“Refunding supply has declined substantially this year and will likely get to only $150 billion; by our estimates, if tax-exempt advance refundings were resurrected, this would have reached $230 billion or even more in 2022,” Barclays strategists said in a Friday report. “Without advance refundings, issuers will likely continue to use taxables to refund their bonds, and after a slowdown in the past several months, taxable supply should increase starting in late 2021 or early 2022.”

Taxable issuance started out stronger at the beginning of 2021 but dwindled as interest rates fell and the need for refunding debt also fell. Rate and spread relationships were not necessarily as compelling in October as they were at the beginning of the year.

The drop in taxables can be attributed to several factors including volatility and rising rates, which make taxable refundings less viable for issuers, and available alternatives, such as forward-delivery bonds.

However, Luby and others said they expect to see a reversal with this trend.

But, unlike corporate bond issuers, municipal issuers aren’t in a position to try to time the market, so he doesn’t believe there will an immediate change, with more of an effect in the start of 2022. Even with a potential uptick in taxables, issuance may not break 2020’s record $484 billion.

“The uncertainty around the infrastructure/reconciliation bills seems to have impacted the primary market as well. Long-term muni bond issuance volume in October is disappointingly low,” BofA Securities strategists said in a Friday report. To meet their $500 billion annual issuance projections, total issuance for the final two months of 2021 needs to exceed $105 billion.

They cautioned that as long as Washington continues to debate the potential packages, issuers may pause still on making issuance decisions.

“High long-end muni/Treasury ratios may lead to some increase of taxable issuance, though with the bills under discussion, it is hard to expect robust taxable advance refunding issuance,” the report said.

In the states, California, as usual, led all others so far this year.

Lynne Funk contributed to this report.