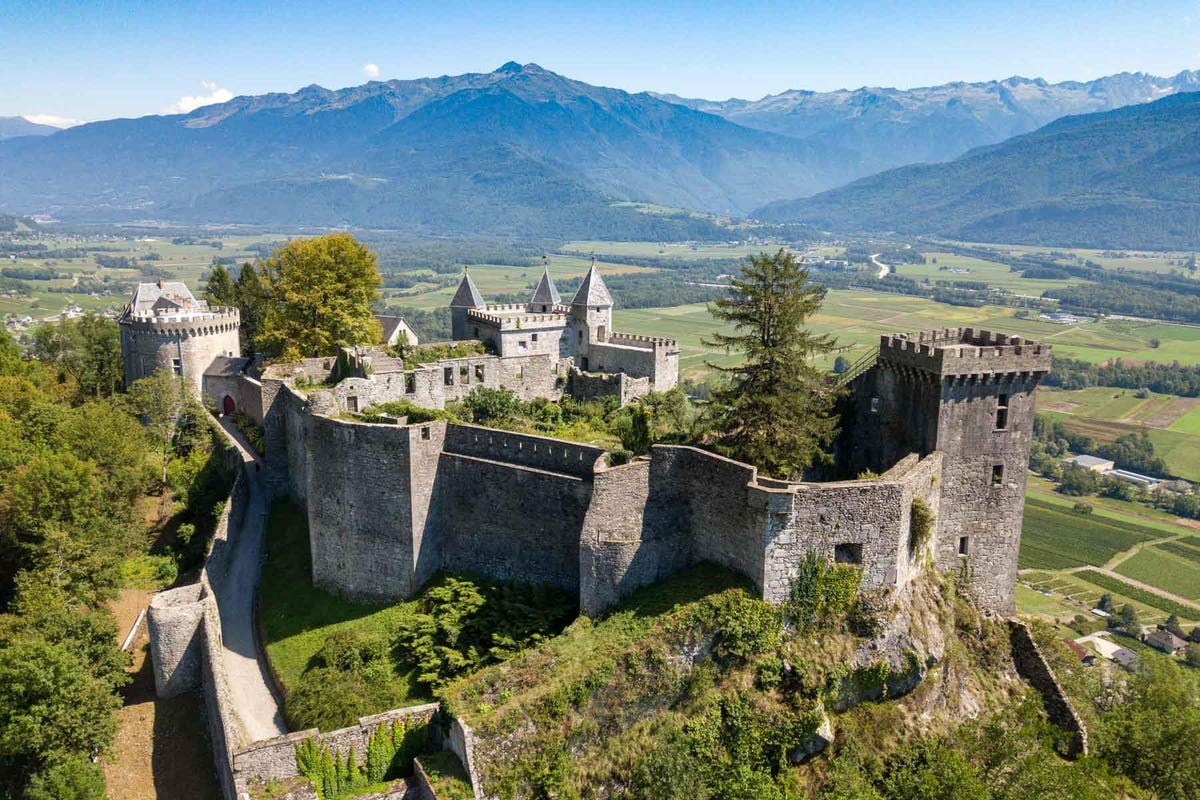 There’s nothing like owning a piece of French history – especially when it involves a castle on a site that has been occupied since the 4th century.

This manor house and stone citadel look out on panoramic views of the bucolic valley of Savoie in the Auvergne-Rhône-Alpes region of southeastern France.

Perched strategically on a rock outcropping, the elevated dwelling took shape from the 11th to 16th centuries. The residence, set in the outer courtyard of the fortress, underwent an extensive restoration in the 19th century and has been kept up since.

While the castle portion is now largely a relic, much of its majesty endures with several towers and thick defensive stone walls intact.

Battlements top the towers, creating gaps in the parapets where archers once shielded themselves while firing on invaders of the war-torn region. Paths and gardens fill the bailey – the courtyard where soldiers may have trained.

Over the centuries the castle was used to guard an important transportation route and, for a time, as a prison from which the revolutionary politician the Marquis de Sade famously escaped while his guards ate dinner.

The manor house, which is attached to the castle, retains a historical charm. Authentic materials were used to keep its character intact.

The central hall is adorned with stained-glass windows and anchored by wood wainscoting. An ornate staircase splits at a landing to access the upper levels.

The large reception rooms and 14 bedrooms have high ceilings that create a feeling of spaciousness throughout the 750 square meters, or 8,073 square feet, of interiors.

The round-shaped primary bedroom has a domed ceiling and decorative woodwork.

Outbuildings include a chapel featuring stained-glass windows, a raised altar, stone work, wooden pews and a soaring groin-vaulted ceiling. One tower has been converted to a billiard room.

The grounds, which include stables, gardens and a garage, encompass 1.14 hectares or roughly 2.8 acres of land.

Needless to say, they don’t make properties like this anymore.

Nicolas Devic of Groupe Mercure is the listing agent for the estate, which is set near Saint-Pierre-d’Albigny. The asking price is 4.21 million euros or close to US $4.86 million. The castle is classified as a historic monument.

The property is about a 20-minute drive from the alpine town of Chambéry and an hour from the international Lyon-Saint Exupéry Airport. Lake Carouge is about 10 minutes away.

Hiking, biking, skiing and touring wineries are among local attractions.

Groupe Mercure is a founding member of Forbes Global Properties, a consumer marketplace and membership network of elite brokerages selling the world’s most luxurious homes.