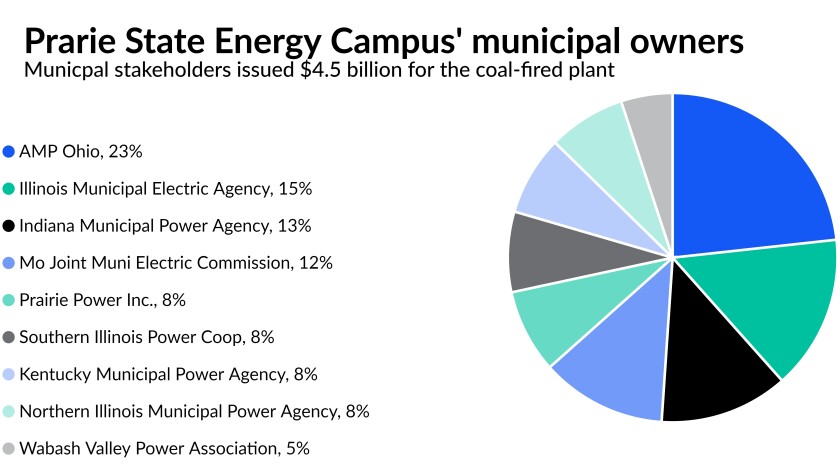 Fitch raised IMEA’s issuer default rating and credit on $831 million of power supply bonds to AA-minus from A-plus and revised the previously positive outlook to stable.

The upgrade stems from a “trend of strong financial performance and very low leverage ratio,” Fitch said. “The upgrade is also supported by the system’s very strong revenue defensibility, which is rooted in the strong take-and-pay power sales contracts with its 32 all-requirements members, the independent legal ability to increase rates, and the strong credit quality of the largest members.”

IMEA also benefits from an ongoing diversification of energy sources. “While IMEA’s resources are still predominately coal-fired, the agency continues to add renewable resources and will utilize market purchases to meet expiring coal-based purchased power contracts over the next few years,” Fitch said.

IMEA’s PSEC debt is retired the same year — 2035 — that Prairie State must meet reduced carbon emission targets to remain fully operational until 2045 when zero emissions are required to avoid decommissioning.

“Fitch does not believe IMEA’s operating risk profile or general credit quality are materially impacted by the legislation as all of the agency’s outstanding debt matures by 2035, which coincides with the start of the carbon reduction goals set out in the new law,” analysts wrote.

Fitch also believes the legislation’s long-time horizon provides sufficient flexibility to address the carbon reduction requirements and analysts said they would continue monitoring developments on the legislation’s impact to “assess any potential impact on IMEA’s future costs, capital needs or operations as they become known over time.”

IMEA is more insulated than some other of the nine public utility stakeholders. Moody’s Investors Service warned in a report recently that it views the legislation as a negative credit factor for some of the municipal owners.

The law calls for municipally owned coal plants to cut all carbon emissions or face closure by the end of 2045. By early 2035, they must reduce emissions by 45% but they will have another three years to meet that mandate by either partially shutting down or through so-far only theoretical carbon capture technology.

About $1 billion of debt issued for the project will remain outstanding when the first reduction target hits in 2038. The project is owned by nine municipal power agencies or cooperatives in Illinois, Indiana, Kentucky, Missouri and Ohio.

All may eventually need to find another source of power but those that must continue to service debt issued for the project face the most pressure.

“Should the output from PSEC need to be curtailed in the future to meet the carbon reduction requirements, Fitch believes a lack of fixed debt payments beyond 2035 positions IMEA well to shift to other resources and/or better absorb the costs (including potential financing costs) of carbon sequestration, if needed,” Fitch said.

IMEA has 32 local government members that serve 145,000 residential and 21,000 commercial and industrial accounts throughout the state under contracts that carry a 2035 expiration date. Those members’ credit quality is strong, with the largest participants being the far west Chicago suburbs of St. Charles and Naperville, another credit plus, Fitch said.

Prairie State’s municipal owners sold $4.5 billion to fund construction of the plant with a final maturity in 2047.