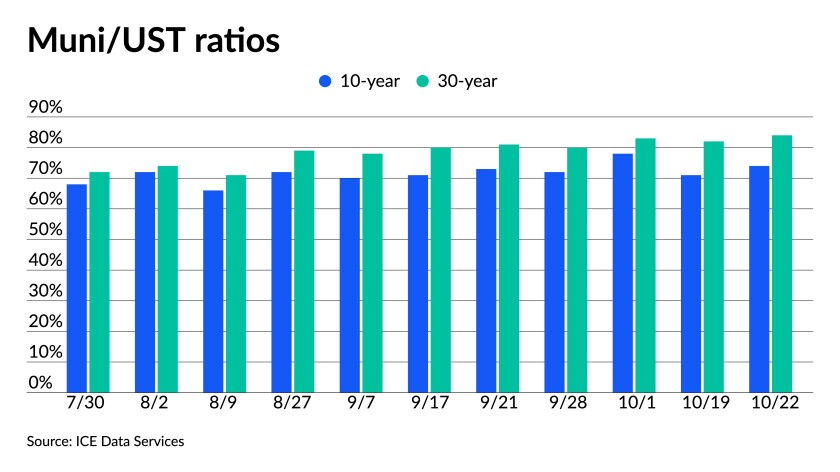 Barclays strategists Mikhail Foux, Clare Pickering and Mayur Patel said as Treasury yields have moved higher over the past week, tax-exempts outperformed earlier in the week, though more so in the front end and belly of the curve. However, the market dynamics changed Thursday, when the muni market “finally cracked.”

Long-dated bonds are feeling more pressure than shorter-dated securities. At close to 80% the 30-year muni-to-UST ratios are still relatively rich by historic standards, they said.

The 10-30-year slope is getting close to the steepest point since late the first quarter of 2021, with the long-dated portion of the muni investment-grade index losing about 0.3% this month.

“Until rates stabilize, investors will likely remain cautious about this part of the curve, in our view,” they said.

BofA Securities in a weekly municipal reported noted, if muni-UST ratios fail to move higher with Treasury rates, it would be the first sign the muni rates market is becoming more constructive.

“This is now the case: muni rates and credit spreads barely changed this week while muni-Treasury ratios began to decline,” they said. “Technical conditions for ratios also portend further declines ahead. Indeed, while it is understandable muni rates followed Treasuries higher since September, the ratio rise over the summer is less comprehensible.”

While high-grade tax-exempts are “feeling a bit heavy” in the face of higher UST rates and greater supply, taxable spreads remained in check, even tightening as higher yields made long-dated bonds more attractive to total return investors, according to Barclays.

“At the moment, there is strong and growing demand for the product from domestic and foreign investors, at the time when taxable supply is in check and the visible pipeline has not been overwhelming,” they said.

High-quality taxables are still attractive compared with corporates, especially for AAs and AAAs. “That is where we see the most value at the moment, while we also see this part of the taxable market segment as more defensive in the face of rate volatility,” they said.

“However, aside from some seasonal weakness and some uncertainties on the policy front, we still feel positive about the municipal market for the remainder of the year.”

Volume falls slightly for the week of October 25 with the total potential volume estimated at $7.408 billion, with $6.036 billion of negotiated deals and $1.372 billion in the competitive market.

In late trading, Treasuries were better as equities were mixed near the close.

The Health and Educational Facilities Board of the Metropolitan Government of Nashville and Davidson County, Tennessee, (A3/A///) is set to price Thursday $293.205 million of taxable revenue bonds (Vanderbilt University Medical Center), Series 2021A and 2021B. J.P. Morgan Securities.