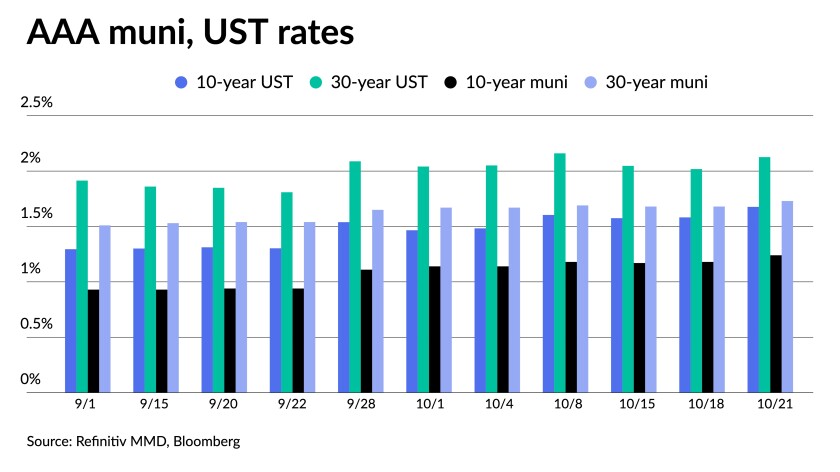 Growing selling pressure caught up to the municipal secondary market, pushing yields higher by as much as five basis points on bonds five years and out while the five-year U.S. Treasury crossed 1.20% and the taxable market was being tested again by investor concerns about inflation.

Refinitiv Lipper reported inflows into municipal bond funds totaled $177 million in the latest reporting period while high-yield funds turned negative, experiencing $58 million of outflows. While this marked the 33rd week in a row of inflows into muni funds, some participants see the waning flows as a signal that selling pressure is here to stay and may result in outflows in short order.

Dealer inventory and sell-order totals have been higher the past week, bid list volume has grown significantly from the beginning of the month and hit $857 million on Wednesday. Bids-wanted were again very high Thursday and traders said they would not be surprised if they reached $1 billion or more on the day.

Given the build-up in bid lists, the potential for outflows next week would also not be a surprise.

In recent sessions, the dollar value posted for sale has been above $700 million and the item total has increased by more than 30%, she noted.

“A similar pattern developed in late February when both bid-wanteds and secondary offering totals trended higher,” she said. “Specific structures that have been more prevalent are bonds with 2025-2029 calls and longer, more deeply discounted bonds — both trading at wides to recent spreads.”

The result of this additional volume has been a rise in yields and that was seen in the moves Thursday. Refinitiv MMD cut levels by five basis points on bonds five years and out, moving the five-year to 0.62%, the 10-year to 1.24% and the 30-year to 1.73%. The short end was not immune either with triple-A benchmark scales cutting one to three basis points on bonds inside five years.

“Actual yield or relative value targets are impacting where funds are being committed along the curve, but with a definite bias toward more attractive levels,” Olsan said.

In late trading, Treasuries were softer as equities were mixed near the close.

The four-week moving average remained positive at $270.859 million, after being in the green at $614.112 million in the previous week.

Economy
The market remains focused on inflation, which will drive Federal Reserve action. “The next few months are critical to determining if inflation is transitory” or becoming ingrained, Fed Gov. Christopher Waller said on Thursday.

If it proves to be ingrained, “we will have to be much more aggressive in our policy stance in 2022 than I was expecting,” Waller said in a live-streamed discussion with the OMFIF. He said there is more upside risk than he expected there would be.

Defining stagflation as high inflation and high unemployment, he said, that’s not the current situation, since unemployment is declining. “The problem is not a shortage of jobs,” which is usual in times of stagflation.

The Fed has begun to acknowledge price pressures “will last for much longer than initially anticipated,” said Luigi Speranza, chief global economist at BNP Paribas.

Waller said he sees inflation slipping toward 2% next year, but not necessarily reaching it.

“The focus of the debate has moved from the duration of current inflationary pressures to the chances that what is now accepted as a relatively protracted period of higher inflation might trigger a change in the mindset of consumers and businesses and hence a regime shift that would see inflation moving persistently higher than over the past two decades,” Speranza said.

Food and energy have had a large role in the recent run-up in inflation. Energy price pressures will continue for a bit, said Paul Franzen, senior equity analyst at Commerce Trust Co. “There is clearly potential for further price spikes in the near-term across a number of energy-related commodities given today’s generally low inventory levels in the face of rising demand. While likely manageable, these higher energy costs could add to the near-term bite of inflation and its impact to overall global economic growth.”

But natural gas prices will likely ease next year with expanded capacity expected, he said.

The Fed will face “a balancing act,” BNP’s Speranza said, since disregarding its inflation averaging strategy, “would damage their long-term credibility.”

BNP sees the Fed sticking to the plan to end asset purchases by the middle of next year. “This leaves space for one or two rate hikes next year,” with BNP expecting one. “This view accounts for a likely dovish change in the composition of the FOMC, as some of the positions already or soon vacant are filled.”

Thursday’s data was mixed, leaving the expectation that taper will be announced after the November Federal Open Market Committee meeting.

The leading economic index came in below expectations, at a 0.2% rise in September, its smallest gain in seven months. The coincident index was flat, while the lagging index gained 0.3%.

Economists polled by IFR Markets expected a 0.4% climb in the main index.

The small increase suggests “a more moderate growth trajectory compared to the first half of the year,” said Ataman Ozyildirim, senior director of economic research at The Conference Board, as the Delta variant, inflation fears, and supply chain issues remain troublesome.

“Though consumers’ finances remain solid, their perception of the economy has withered this fall,” said Wells Fargo Securities senior economist Tim Quinlan, Economic Analysts Hop Mathews and Sara Cotsakis. “Souring sentiment is perhaps the most worrisome of the falling LEI components, given personal consumption expenditures generally make up the bulk of GDP growth and drops in consumer confidence surveys have a decent track record of predicting recessions.”

But in the past two month “consumer spending has held up relatively well,” they said, suggesting “what consumers feel and what they do are not always in line.”

The Philly Fed manufacturing index fell more than expected in October, dropping to 23.8 from 30.7 in September (24.5 expected), while prices paid rose and prices received dipped, while both remained “elevated.” The number of employees index gained.

“This signals that most employers don’t need or want to shed workers,” said Mark Hamrick, senior economic analyst at Bankrate. “It is quite the contrary with job openings remarkably high.”

The question of what happens with inflation is “unanswerable,” he said. “It is a tremendous source of uncertainty for the outlook over the intermediate and longer-terms.”

The corporation said savings from Wednesday’s deal totaled almost $17 million in each fiscal year from 2023 through 2025 and nearly $10 million a year from fiscal 2026 to fiscal 2047.

During the one-day retail order period, HYIC received $190 million of orders, of which around $126 million was usable.

Chip Barnett contributed to this article