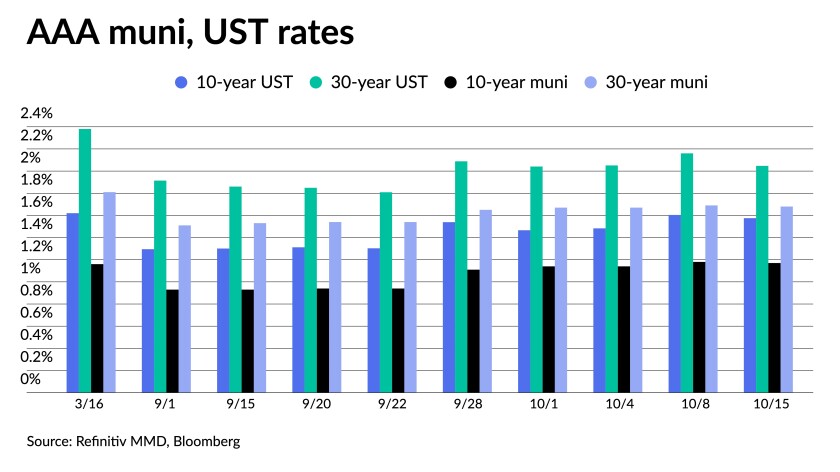 The aggressive flattening of the Treasury yield curve this week was led by investors viewing tapering as imminent and concerns of tightening financial conditions, along with the potential for a rate hike through the second and third quarters of 2022, noted Barclays strategists Mikhail Foux, Clare Pickering and Mayur Patel in a weekly report.

Tax-exempt yields were mostly steady, largely ignoring the swings in the Treasury market. As the front end of the UST curve sold off and the long end rallied, short-dated municipal to UST ratios declined.

As supply grows — 30-day visible tax-exempt supply is nearing recent highs at $14.59B — the steadiness in rates has given some support to the market, which appears to have stabilized mutual fund flows.

The total potential volume in the coming week is $9.489 billion with $7.591 billion of negotiated deals and $1.898 billion of competitive loans. The total includes a large amount of green, sustainability and social bonds. The calendar also includes corporate CUSIP deals, and taxable refundings continue to see an uptick. Several non-rated healthcare deals should give yield-seekers options.

“Although the muni market is not out of the woods yet, historically it does relatively well starting in November or December, which is just around the corner,” the strategists said.

“It might be somewhat different this time around, given the uncertain path of the debt ceiling negotiations coupled with the passage of the Build Back Better plan, which could have a profound effect on the asset class. However, the muni market will likely start performing soon, in our view.”

In late trading, Treasuries were weaker as equities were better on the day.

It’s still all about inflation
Friday’s data suggested that inflation remains a problem, as the voices calling for Federal Reserve action increase.

Former Treasury Secretary Lawrence Summers said he was “alarmed” by the spread of inflation to more goods and said on Bloomberg TV Friday the Fed “should taper faster than they’re talking about.”

A day earlier, Morgan Stanley CEO James Gorman told Bloomberg not all inflation will prove to be transitory and the Fed will need to be more aggressive to stop it. Other major financial firm CEOs have also gone on record about inflation lingering at least into next year or longer.

“Inflation is running very hot — [personal consumption expenditures are] at a 30-year high — and the ‘transitory’ (the Fed’s word, not ours) nature of recent price increases don’t seem so transitory,” said Robert Ostrowski, chief investment officer of the global fixed income group at Federated Hermes.

The Fed hasn’t said when inflation would stop being transitory, if it continues, he noted. “The reality is the Fed can keep moving the goal posts, meaning if you’re in the non-transitory camp, you may never win the ‘how long?’ discussion.”

The bond market, Ostrowski asserted, “isn’t priced” for inflation of 2.25% to 2.5% through next year. “Inflation and bonds don’t typically go together.”

The Fed could start tapering next month, the minutes from its latest meeting suggests, “and with negative real yields almost across the curve, it’s hard not to worry that flows at some point could turn negative,” he said. “It is possible the economy stumbles, causing a sell-off in the risk markets that gives bonds a boost.” But that is not Federated Hermes’ base case.

Inflation made a read of the September retail sales report difficult.

“A better-than-expected September retail sales report says as much about the higher prices that come with supply shortages as it does about the resilience of consumer spending,” said Wells Fargo Securities Senior Economist Tim Quinlan and Economist Shannon Seery.

Retail sales rose 0.7% in September after a 0.9% increase a month earlier, while excluding autos sales gained 0.8% after a 2.0% jump a month before. Economists polled by IFR Markets expected sales to drop 0.2% and ex-autos to grow 0.5%.

“Vehicle sales actually fell after adjusting for inflation; spending on food in grocery stores and at restaurants did, too,” said Grant Thornton Economist Yelena Maleyev.

While the impact of “the Delta-induced lull in the third quarter” is waning, she said, the economy is “facing much higher inflation and goods shortages, which will constrain spending for the fourth quarter.”

Supply issues will continue into the holiday shopping season, leaving the Fed “no choice but to taper its purchases of Treasuries and mortgage-backed securities starting in November.”

But Morgan Stanley researchers said consumers have been “resilient,” despite supply shortages. “The increase in food services throughout the Delta wave suggests households are better equipped to manage around COVID flare-ups.”

Also released Friday, the University of Michigan consumer sentiment index fell to 71.4 in the preliminary October read from 72.8 in the final September report, while current conditions slid to 77.9 from 80.1 and expectations dropped to 67.2 from 68.1.

Economists expected the headline figure to be 73.8, current conditions at 82.0 and expectations at 70.3.

Contrasting retail sales with consumer sentiment, Quinlan and Seery said, “the broad-based strength is a reminder that gloomy sentiment measures are often at odds with actual spending patterns.”

It’s possible retailers will see a “banner year” of holiday sales, they said, “if stores can keep merchandise in stock … though that is a big ‘if’ this year.”

Earlier, the Empire State Manufacturing Survey’s general business conditions index dropped to 19.8 in October from 34.3 in September. Economists expected a smaller drop to 27.0.

The prices paid index rose while the prices received declined, with both remaining near record highs, according to the release. The number of employees index also dropped.